Church leaders and EFF members met in Phoenix, north of Durban, on Wednesday ahead of a march in solidarity against racism in the area.
Image: Supplied

Provincial leaders of the Economic Freedom Fighters (EFF) in KwaZulu-Natal will embark on a peaceful march of solidarity in Phoenix, north of Durban, on Thursday against those involved in criminal acts which saw 36 people killed during the recent unrest.

This after members of the party met church leaders in Phoenix on Wednesday afternoon amid growing concerns of fuelling racial tensions already strained after it emerged that most of the murder victims were from informal settlements around the mainly Indian township.

The EFF on Tuesday posted that they planned to “march to Phoenix against racist Indians” on Thursday, which drew mixed reaction ranging from criticism from minority groups to support from those calling for justice for the victims and their families.

But after Wednesday's meeting with the clergy the EFF said it was embarking on a “solidarity march to Phoenix”.

“We were asked by the clergy in Phoenix to attend the meeting, in fact it was beyond just church leaders from Phoenix. Some pastors came from the south and north coasts due to their concerns about what has been happening. They wanted us to explain what our purpose was as they wanted to hear a message of peace.”

He said in the eight years the EFF has been in existence the party had never held a march where it incited violence.

“We are going to Phoenix to say we don't agree with what happened and reject all racial tensions. We are saying the community of Phoenix must come forward and assist police in arresting those behind these killings. The church leaders told us what we already know — not all Indians are racists and not all residents of Phoenix are racist.”

Pastor Kevin Chetty told TimesLIVE that the meeting was well received by the EFF and they were pleased with the outcome of the engagements.

“They have changed their poster from racism to a solidarity march. The entire narrative has changed. The whole of Phoenix cannot account for a handful of people who caused the damage on the street and took the law into their own hands. We agree with the EFF and other political leaders that those responsible must be arrested and dealt with accordingly,” he said.

Meanwhile African Democratic Change (ADeC) leader Visvin Reddy said his party would participate in the march and received support from the EFF. 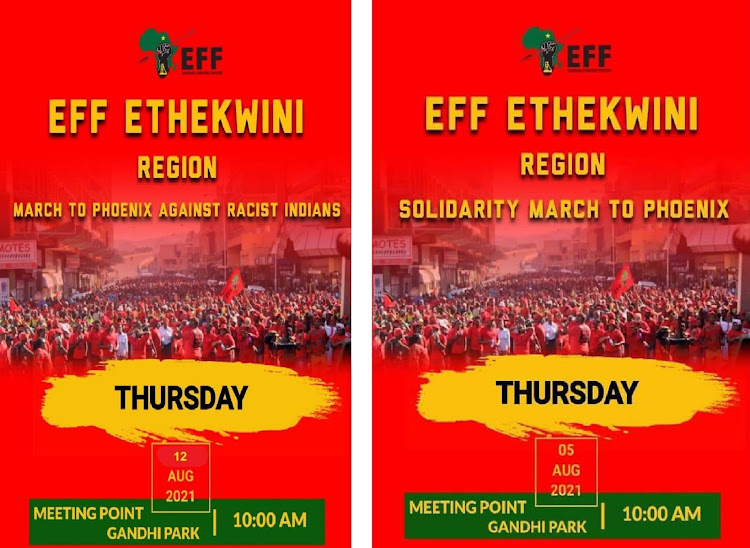 The EFF's initial poster on the left versus their amended poster on the right following their meeting with church leaders in Phoenix
Image: Supplied

“Organisers have confirmed that Reddy will be accommodated at the march and will be afforded VIP status. He will also be given the platform to address those present.”

Reddy expressed concern that a peaceful protest by a leading opposition party, especially at a time when racial tensions are high, could degenerate into chaos, with innocent people affected.

“I am not afraid as I believe there are more good men and women among all citizens in SA. The truth must be told and some mischievous people are deliberately distorting the truth for their sinister agendas. SA Indians, Coloureds and Africans have a proud history of fighting injustices and we will never allow a few thugs to tarnish the unity that has been built over decades.”

He said many people of Phoenix were worried that the EFF march would result in chaos and bloodshed.

“The EFF is marching against racism and we are also against anyone who practises or preaches racism,” said Reddy.

Meanwhile, the DA said its leader John Steenhuisen had written to the chairperson of the South African Human Rights Commission (SAHRC) to intervene in the “escalating race baiting and racial scapegoating in KwaZulu-Natal in the wake of the unrest and looting, and specifically to take action against the organisers of a planned EFF march on August 5 aimed at whipping up anti-Indian sentiment”.

Steenhuisen said: “As was the case in the build-up to the looting and violence three weeks ago, starting with the gathering at Nkandla on the eve of former president Jacob Zuma’s arrest, it is clear that the police in the province neither can nor will step in to prevent the threat of violence.

“The vast majority of South Africans want nothing to do with this ANC factional battle, and they certainly do not want to get caught up in any violence. It is therefore imperative that this is stopped before it turns into a full-blown race war. I believe it is within the SAHRC’s mandate to step in and stop this march. And if they feel they do not have the power to do so by themselves they must seek an urgent interdict from the court.”

Khoza in the meantime added that the march would begin at Gandhi Park at 10am and proceed to the Phoenix police station to hand over a memorandum. He wouldn't provide details of the document.

He said the EFF had already met police to outline the route and plan for the march.

According to a source within eThekwini municipality, the march was awaiting approval from the city manager.

“It will in all likelihood be approved because the EFF has already done their planning and proposed it to the police. They are expected to march for 4km from Gandhi Park to the Phoenix police station.”

The source said a large contingent of police, metro and military personnel will be deployed to the area.

Do you support the EFF's march in Phoenix?

‘Insensitive’ or outspoken? Malema divides SA with criticism of ‘Milkpark’