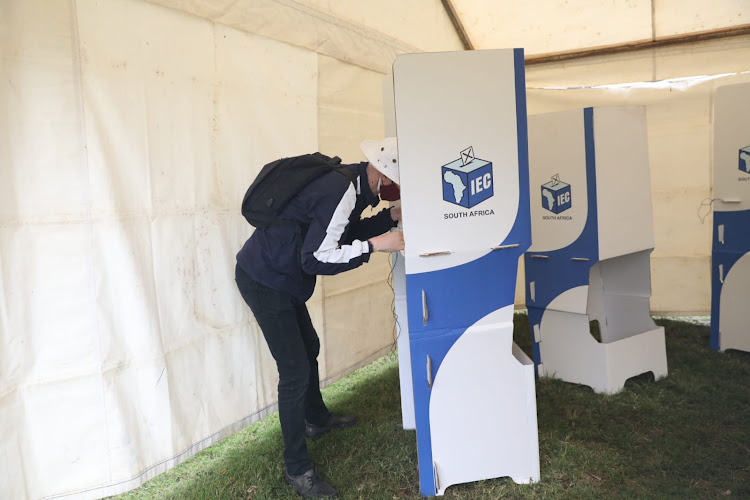 The IEC has approached the highest court in the land in a bid to postpone local government elections. File photo.
Image: Sandile Ndlovu

The Electoral Commission of SA (IEC) has officially launched a bid in the Constitutional Court to postpone the fifth local government elections..

This after its decision to adopt the Moseneke report which recommended elections be deferred to no later than February 2022 if they are to be free and fair.

The commission resorted to a direct and urgent application to the apex court due to “weighty constitutional matters” that include balancing rights enshrined in the constitution.

“This court application is extraordinary and presumably unprecedented. The issues which are core to the application have a bearing on the political rights of citizens as well as the right to life, bodily and psychological integrity and access to health,” IEC chairperson Glen Mashinini said on Wednesday.

Mashinini said there was also a need for certainty regarding preparations for municipal elections.

His remarks come hours after co-operative governance and traditional affairs minister Nkosazana Dlamini-Zuma proclaimed Oct. 27 as the date for the local government polls. However, this was to meet statutory and constitutional obligations which could change pending a decision by the Constitutional Court.

Dlamini-Zuma's proclamation has several implications for the work of the IEC. These include closing the voters’ roll for Oct. 27, meaning no new voters may be admitted to the roll for the proclaimed election date. It forces the commission to forge ahead with some of its activities in terms of the timetable until the apex court orders differently.

It also opens the candidate nomination process and for registered political parties and independent candidates to submit their lists of candidates and nomination documents for this year’s elections.

“The commission and electoral stakeholders are in an untenable position where preparations are proceeding for Oct. 27 while at the same anticipating the outcome of the Constitutional Court application for a possible deferral of elections to February 2022.

“The nature of the relief sought by the commission is largely predicated on impossibility to perform a constitutional obligation, which is the conduct of constitutionally compliant elections of municipal councils by Nov. 1, 2021 due to the Covid-19 pandemic and the measures government has instituted to curb the spread of the virus,” said Mashinini.

Mashinini said while the constitution stipulates that when the five-year term of a municipal council expires and an election must be held within 90 days of the date on which that council’s term expired, the commission sought permission to be allowed to conduct elections beyond the 90 day time frame. This was because the current term expires in August, with the 90 days lapsing in November.

“Furthermore, the commission is seeking alternative relief in the event it is not successful with its preferred option. The alternative relief essentially asks the Constitutional Court to declare that failure to hold the municipal elections by Nov. 1, 2021 is unconstitutional and invalid and suspending the declaration of invalidity until the end of February 2022.”

If the court does not grant the extension, local government and municipal councillors stop functioning and being paid. The IEC said it would ask the apex court to prevent this happening.

Mashinini said the commission was also asking the court to take supervisory jurisdiction, requiring the commission to report to the court periodically on its progress in arranging constitutionally compliant local government elections in February 2022.

“The application will undoubtedly offer the Constitutional Court another opportunity to contribute to the evolving jurisprudence of our constitutional order.”

Reacting to the proclamation, the ANC said it would file a submission supporting the IEC  application to the Constitutional Court.

Co-operative governance and traditional affairs minister Nkosazana Dlamini-Zuma is briefing the media on developments regarding the local government ...
Politics
9 months ago

Mali's transitional government is conscious of its commitment to a fixed deadline for arranging elections to restore democracy after last year's ...
News
9 months ago