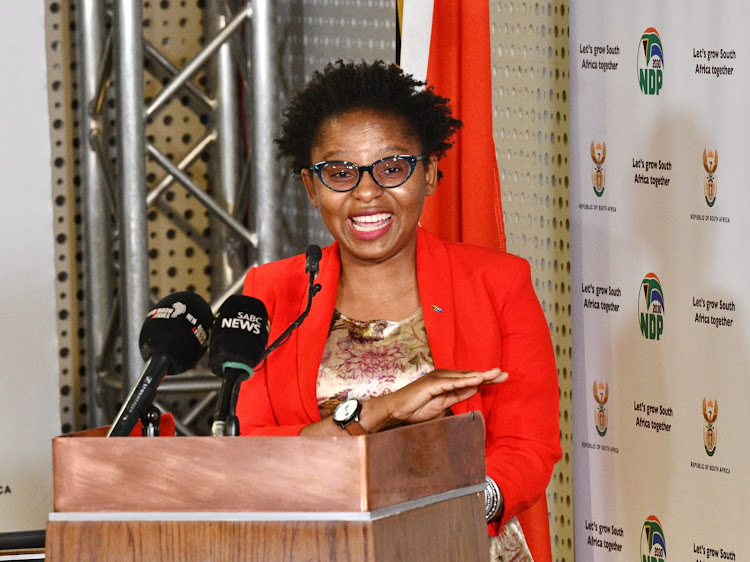 Acting minister in the presidency Khumbudzo Ntshavheni briefs media on the outcomes of the cabinet meeting held on Wednesday.
Image: GCIS

President Cyril Ramaphosa's cabinet has urged communities in KwaZulu-Natal to support government efforts to address racial tensions and undertones in the province.

Acting minister in the presidency Khumbudzo Ntshavheni said the tensions were threatening to undermine the values the founding fathers of a democratic, nonracial and equal SA gave up their freedom and lives for.

The call came on the day thousands of EFF supporters marched in Phoenix against those involved in criminal acts which saw 36 people killed during the recent unrest.

Ntshavheni, who was briefing journalists after Wednesday's cabinet meeting, said the number of deaths as a result of last month's violence has been revised to 354, with the numbers of reported deaths linked to the unrest in Gauteng unchanged at 79 and 275 in KwaZulu-Natal as of Wednesday.

In KwaZulu-Natal, eThekwini metro accounted for the most deaths at 122 and of the deaths reported there, 36 were reported in Phoenix — 29 of them murders and seven subject to inquests. She said 22 suspects have been arrested and appeared in court for the murders in Phoenix.

Ntshavheni said six suspects had been arrested and appeared in various courts for incitement of the public and law-enforcement agencies and the National Prosecution Authority were seized with ensuring successful prosecutions.

The cabinet welcomed the efforts of law enforcement to speedily restore stability to the two provinces, and commended the agencies for progress made in bringing to book those responsible for inciting the violence.

With regards to the vaccine rollout, Ntshavheni indicated that Ramaphosa may revise the target date for the country to reach population immunity.

She said the national vaccination programme had gathered so much pace in recent days that the health sector (public and private) vaccinates a minimum of 1-million people in three days.

“At the current pace, the president should soon announce a revised target date for the country to reach population immunity,” she said.

To date, more than 8-million South Africans have been vaccinated.

Ntshavheni threw a challenge to the 35 to 49 age group to get vaccinated to ensure that 12-million jabs would have been administered by next Friday.

POLL | Do you agree with the EFF's march in Phoenix?

EFF secretary-general Marshall Dlamini said on Thursday the party will deal "decisively" with racism in Phoenix.
Politics
10 months ago

Busloads of EFF supporters gathered at the Gandhi Park in Phoenix, north of Durban, ahead of a march on Thursday against those involved in criminal ...
Politics
10 months ago

DA leader John Steenhuisen said the EFF was hoping to "stir up racial tensions and inflame violence" with its march in Phoenix.
Politics
10 months ago