What you said: EFF giving away ‘luxury’ houses is no surprise with elections around the corner 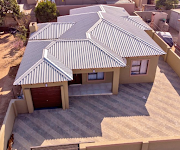 The EFF's housing initiative is a ploy to campaign for the forthcoming local government elections, according to many TimesLIVE readers.

The initiative was to commemorate Women's Day.

According to the party, three houses were handed over to women in Seshego, Limpopo.

“When we say our people must have quality houses, we are speaking of women dignity as many households are women-headed. The EFF government will provide such quality, spacious houses to all the people,” he said.

TimesLIVE recently ran a poll asking the public what they thought about the EFF handing over the houses.

The poll garnered more than 9,000 votes in less than 24 hours, with 71% of voters saying the move was no surprise given that it is almost election time.

Twenty-three percent said people needed homes like that, and 6% said the EFF was probably only building a few houses to give away.

What do you think of the EFF handing over ‘luxury’ homes?

On social media, readers were also split, with many questioning if the grannies could afford to maintain the houses.

“This is a good gesture. However, will these grannies be able to maintain the running cost of this house (the more the value of your house, the more levies you will pay) with their pension money?” wrote Dineo Mbalula Mpeko.

Others said political parties should follow suit instead of criticising each other.

“It's a good start. More political parties should make an effort to provide housing to their constituents. Majority of these parties have big donors so at least use that money to help their voters instead of always criticising the ANC for non-delivery,” said Michelle Pillay-Brown.

They are not luxury they are a dignified basic right necessity of a right to shelter as enshrined in the constitution.

It's a PR exercise. If you can establish which criteria was followed and who's the beneficiary you'll cry

It's good for community, at least they are doing something

3 elderly people got homes, I don't care about the politics. Great news for them!!

It's not the first time. The EFF has been building houses for poor people and renovating schools and giving bursaries. The EFF walks the talk using it's own money not our taxes. They even donated 16 million Rands towards Covid relief and they were the biggest donor.

It's a great initiative for a party not in gov. Nonetheless I wish we make these elections quite frequent perhaps somewhere we may end up lots of poor receiving houses prior every election, if it goes 3 houses/party with more 50 parties doing that,bigger population will benefit