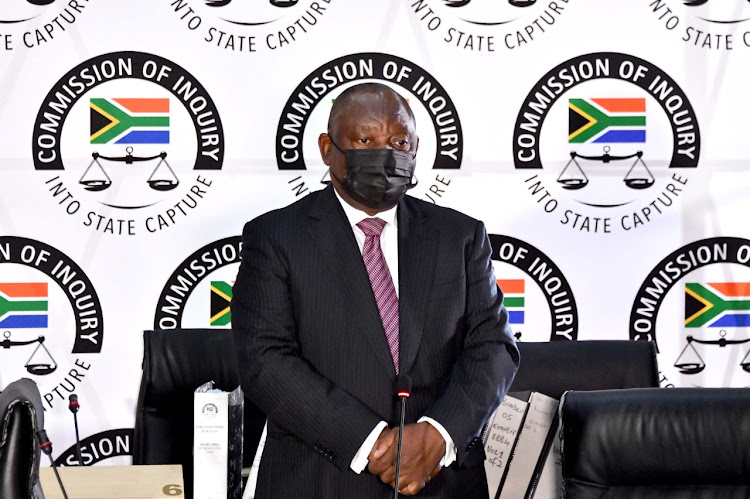 South Africans followed president Cyril Ramaphosa's testimony at the state capture inquiry on Wednesday, with many taking to social media to weigh in on it.

Ramaphosa told commission chairperson deputy chief justice Raymond Zondo that he had not been aware of state capture until it was exposed by journalists.

He was then left with several options including resigning from the executive. The president said this would have impaired his contribution to ending state capture.

His testimony drew mixed reactions, with some saying he should have either resigned or spoken out.

Here are seven telling quotes from his testimony that had SA talking:

President Cyril Ramaphosa appeared before the state capture commission of inquiry on August 11 2021. On Ramaphosa's first day in the hot seat, he was questioned on corruption, Eskom, Prasa and his involvement with former Eskom CEO Brian Molefe.

How influential is the deployment committee in appointing comrades?

“The deployment committee knows that, at best, [all] it can only ever do is to note that there is a vacancy and that there are certain names that could be proposed. Having done that, it also knows very well that it is not the appointing structure. By definition and the way our constitution works, it could never have the judge appointed.”

The minutes of ANC cadre deployment committee meetings for the period between 2013 and 2018 - when Cyril Ramaphosa was chairperson of the committee - have mysteriously vanished. Do you know where the missing cadre minutes are? DMs open! pic.twitter.com/JFB6t23KHt

What motivated the deployment committee's recommendation of two justices to fill the Judicial Service Commission vacancies in 2019?

“The party now more and more focuses on competence, professionalism and capability to do the work. Another balance is the demographic balance of our country. Sometimes the temptation is we will just take mostly males and mostly African and the party will say no this demographic does not represent our country.”

#StateCaptureInquiry If only Ramaphosa felt that deeply about corruption than he does about gender balance, demographic balance, youth employment and GBV.

Did he consider resigning after learning of state capture?

“I approached Jessie Duarte and said to her I would resign my position as the deputy president of the republic, and I believed that message was conveyed to the then-president.”

“I approached him [Zuma] and said I think we should close the war room because we had too many entry points at Eskom. Let us have one person who will run the process of repositioning Eskom and I wanted to be disengaged. I felt Brian Molefe was the name who could do the work.”

I wonder if Brian Molefe's black excellence card, will be revoked by RET now that Its alleged that Zuma has nothing to do with his appointment🤔 #StateCaptureInquiry #cyrilramaphosa

Was he Eskom's 'de facto' chairperson?

“I could never be Eskom's chairperson. I was deputy president and in that role, we were dealing with the challenges that Eskom was facing. I could never be that brazen as to advance the interests of one company that everyone could have known I was associated with. Even the notion of me being chairman of Eskom is quite bizarre.”

23/ Brian Molefe's allegation that when he came to Eskom, mgt reported to the war room chaired by Ramaphosa making him the de facto Chairman. Now Pres doesn't deny war room involvement anymore but says it's a 'bizarre' allegation. 😂 pic.twitter.com/vDlG1tfc0G

Did he know about the links between Molefe and the Guptas?

“I had no inkling or knowledge or even suspicion that there was that linkage in connection. I noted that, and in time, it became a real concern that somebody one held in high regard was entangled with a family that had captured the state.”

After president Ramaphosa's Zondo commission interview today i have so many questions.
One being how did he not know that the person he recommended for a position has Gupta links.

For the amount of times #cyrilramaphosa says "I had no idea" or "I had no clue" at #StateCaptureInquiry one has to wonder why we have someone so clearly clueless as president.

Did he ever meet the Guptas?

“I met them after the 53rd conference at a breakfast. I met them again when they came to the ANC headquarters in Luthuli House. It is at that stage we discussed the landing of the plane at Waterkloof and expressed the view about the difficulty they had placed President Zuma and the government in.”

President Cyril Ramaphosa tells Zondo commission he had five options but only one was viable.
Politics
5 months ago

President Cyril Ramaphosa proposed to then president Jacob Zuma in 2015 that Brian Molefe was the perfect person to lead Eskom.
Politics
5 months ago

The former Prasa board chairperson had many ways to act against graft instead of blaming the ANC top six, the president told the state capture ...
Politics
5 months ago