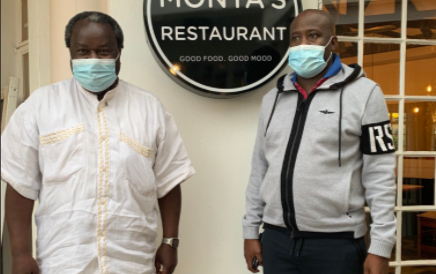 Mboweni shared snaps of himself with Bongo at Monya's Resturant in Tzaneen, Limpopo, on Twitter.

He said he “always liked” Bongo and was happy to have sat down with him.

Bongo, his former wife Sandile Nkosi and 10 others appeared in court earlier this year in connection with the R37.5m sale and purchase of a farm in Mpumalanga.  They collectively face 69 counts of corruption, fraud, theft, money laundering and contravention of the Public Finance Management Act. The matter was postponed until January next year.

Spent a beautiful afternoon at Monya’s Restaurant with Adv Bongo in Tzaneen. Great conversation. I have always liked this young comrade. pic.twitter.com/rZd1S3rpgZ

The visit came as Ngwenya thanked Mboweni for having her over for lunch to discuss economic policy.

Thanks @tito_mboweni for welcoming me in Makgobaskloof for the weekend to talk economic policy, the country, & share your knowledge. Was happy to cook, consider it a national service. Hopefully you’ll use the peppermint tart, flash fried sardines, & hake shakshuka recipes again. pic.twitter.com/fDlQTGcAEL

The former minister, who according to President Cyril Ramaphosa asked to be relieved of his duties during a recent cabinet reshuffle, was accused of “jumping ship” and meeting with those from “the other side”.

Others pointed to him meeting with EFF deputy president Floyd Shivambu late last year, and applauded him for being open to meet those who might have opposing views to his own.

First it was Mazwnele and now Bongo....is Magoebaskloef the new Nkandla for tea and catch up with retirees 🤷🏾‍♂️😂

Did he cross the floor Gwen? Did you persuade him? What an earthquake that would be. 💥

Tito you have went to the other faction ? pic.twitter.com/qgC5MvJDvZ

I'm surprised! Judge no one. Did you jump the fence?

Tito Mboweni hinted on social media that he is ready to make a change and told his followers to "watch this space".
News
2 months ago

What do you think of Mboweni's departure?
Politics
2 months ago

"Minister, your shoes look like they went through 5th wave ya corona," wrote one tweep.
Lifestyle
5 months ago