Msiza failed to voluntarily step aside in line with the ANC resolution that those facing corruption or criminal charges in court must vacate their positions until their matters are resolved. 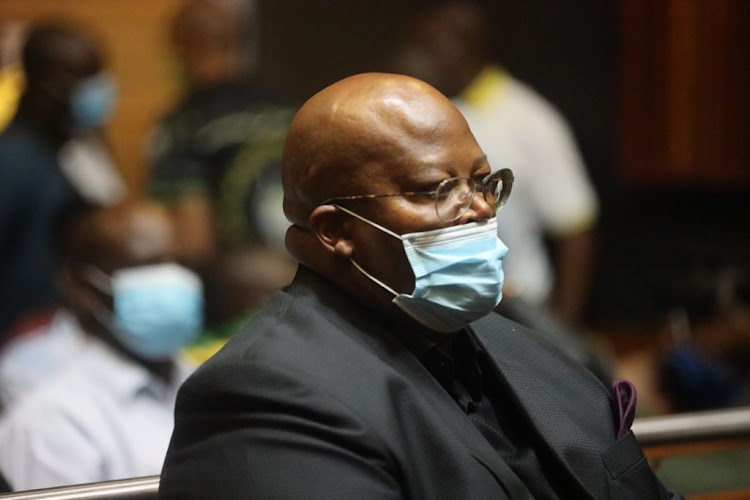 Limpopo ANC treasurer Danny Msiza has been suspended from the party. He is facing corruption charges linked to the VBS Mutual Bank saga.
Image: Zama Luthuli/TimesLIVE

ANC Limpopo treasurer Danny Msiza has been suspended from the party.

This comes after Msiza failed to voluntarily step aside in April in line with the party’s resolution that those facing corruption or other criminal charges in court must temporarily vacate their positions in the party or government until their matters are resolved.

Msiza is accused of corruption in connection with the looting of VBS Mutual Bank.

The ANC deputy secretary-general Jessie Duarte sent a letter to the Limpopo provincial executive committee (PEC) on Monday explaining that Msiza, like all the affected ANC leaders including Ace Magashule, had to adhere to the step-aside resolution.

Msiza opted not to voluntarily step aside after some of his allies in the PEC advised him against it, arguing he had already done so when the report into the VBS Mutual Bank Bank was initially released.

Msiza is now no longer allowed to attend ANC meetings or represent the party in public, among other restrictions. Any ANC meeting attended by Msiza as of Monday would be unconstitutional, ANC Limpopo secretary Soviet Lekganyane told TimesLIVE.

“In the last meeting where the NEC took a decision that Magashule was suspended, Magashule tried to come to the next meeting and the NEC members knew very well that once Magashule was in that meeting the meeting was unconstitutional. So any meeting in Limpopo which the comrade [Msiza] will be attending — from yesterday when the letter was received — is unconstitutional,” Lekganyane said.

He said the letter from Duarte clarified a lot of things.

“She was writing to us to explain the English in the decisions of the NEC. There was no substantive matter there. It was just a procedural matter to say that the decision must be consistently applied without any deviation, we mean this and that. That is what the letter is saying.”

Lekganyane has already told Msiza and the provincial officials what Duarte told him.

“When I received that letter yesterday I wrote him a letter to which I attached that letter from the SGO to say that because it affects him and not us he must know there is a letter which has been received by the office of the provincial secretary. I also gave all the officials a copy. By now they understand what the NEC has decided,” Lekganyane said.

Lekganyane said as a matter of procedure, he told Msiza yesterday that he must step aside, failing which he will be suspended, but since the grace period for a  voluntary step- aside lapsed in April, he is effectively suspended.

According to Lekganyane, any participation of Msiza in ANC structures and activities will be open “defiance” of the ANC and its decisions.

Msiza has not been reachable for comment. Any  reaction will be added to the story once obtained.

Newcastle mayor 'not arrested' in assault case, says he won't step down

The Newcastle municipality has hit back strongly at reports that town mayor Dr Ntuthuko Mahlaba was arrested on Monday.
News
1 year ago

Mantashe’s warning to ANC: Learn from communist China or die from corruption

If the governing party 'does not defeat corruption' then it can kiss power goodbye sooner than anyone would have imagined, Gwede Mantashe said on ...
Politics
1 year ago

The ANC's national presenter will also look into the “divisive” behaviour of Magashule, his aide Carl Niehaus and NEC member Tony Yengeni.
Politics
1 year ago