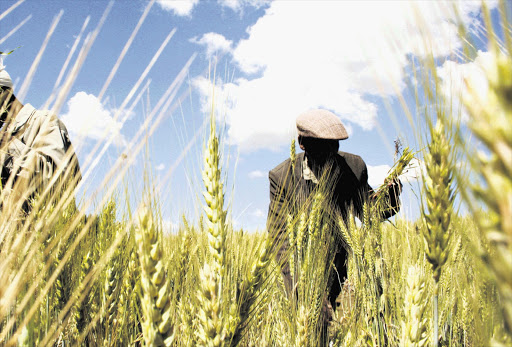 Opposition parties led by the DA voiced opposition to any further delays of the process. File photo.
Image: Reuters

The parliamentary committee seized with the Constitution Eighteenth Amendment Bill to amend section 25 of the constitution has been given two more weeks to conclude its work.

The aim of the bill is to amend the constitution to allow for expropriation of land without compensation.

The National Assembly's programme committee decided on Thursday that after three-and-a-half years since the assembly adopted an EFF motion to amend the constitution, it was time for that work to be concluded.

The decision was taken after opposition parties led by the DA voiced opposition to any further delays in the process, especially deferring it until after the possible October 27 elections.

The assembly's senior administrator, Masibulele Xaso, had told the programming committee of informal talks to extend the section 25 ad hoc committee's term by two months to November. Its mandate ends on August 30 but it can be extended — and has been extended several times — by the National Assembly.

Only political direction can solve the land question, yet the project is doomed if left to politicians courting the popular will
Opinion & Analysis
5 months ago

DA chief whip Natasha Mazzone said her party members who serve in the section 25 committee had told her there was no reason the committee shouldn't finish its work by next Tuesday.

“I am now getting a feeling and a distinct rationale coming from this committee that there is an intention to stall the outcome of this [section 25] committee until after the possible October 27 election. I think that is incorrect in every way because I think this bill has a dramatic effect on all South Africans and the SA public has waited long enough,” she said.

“There is anticipation and anxiety in the air and I think we need to ventilate the outcomes of this bill and get this bill dealt with as quickly as possible.”

Mazzone proposed that if any extension was granted, the committee's term should be extended by a maximum of a week as opposed to the proposed two months.

She was supported by Corné Mulder from the Freedom Front Plus, who is a member of the section 25 committee.

This matter has got to come to a head. It has been on the table for years now.

“We've been involved in this process for very long and the positions of parties is very clear. Everybody knows exactly where we stand and there is nothing in that regard to change the process at this stage,” said Mulder.

The IFP also backed the proposal. Its chief whip, Narend Singh, said the committee had to be satisfied that it has completed its work and table its report.

“This matter has got to come to a head. It has been on the table for years now,” he said.

Xaso warned that the term of the committee expires on August 30 and if it doesn't complete its business by Monday, the committee wouldn't exist by Tuesday.

She was supported by other ANC MPs in the committee, including its chief whip Pemmy Majodina, who said “two weeks would be enough”.

The call to conclude the process comes at a time when the ANC and EFF have fallen out on key clauses of the proposed amendments. As a result, the EFF has said it will not support the amendments proposed by the ANC which exclude state custodianship of land.

Without the EFF's support, the bill to amend the constitution is unlikely to be passed.

The assembly is expected to consider the extension on Thursday afternoon.

Our people want land, not state ownership of land

The EFF's approach on land reform is wrong, writes Ronald Lamola. It conflates consumable national assets like minerals and water with perpetual ...
Opinion & Analysis
5 months ago

The ANC's attempt to amend the constitution to allow for land expropriation without compensation is in tatters following the collapse of the party's ...
News
5 months ago