'At least he can sleep in his own bed and see his grandchildren': Mzwanele Manyi speaks on Zuma's parole 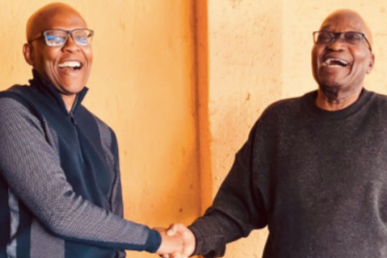 Mzwanele Manyi says Jacob Zuma's release meant that he was given an opportunity to be with his family.
Image: Duduzile Zuma/Twitter

Jacob Zuma’s spokesperson Mzwanele Manyi is relieved at the former president's release from prison on medical parole, saying it means Zuma “can be with family and sleep in his own bed”.

Zuma was granted medical parole after the department of correctional services received a medical report on the former president.

The department said Zuma will complete the remainder of his 15-month prison sentence in a “system of community corrections”.

Zuma was sentenced to 15 months in jail for contempt of court and incarcerated at the Estcourt Correctional Centre in KwaZulu-Natal. He was handed the sentence by the Constitutional Court after failing to appear at the state capture inquiry.

Speaking to TimesLIVE, Manyi said Zuma's release meant he could be with his family.

However, he stressed it did not make him a free man.

“The development means that the man who has been incarcerated without trial and denied the right to appeal his verdict is now given an opportunity to be with his family, though under conditions.

“This is a light at the end of a tunnel. At least he can be with family, sleep in his own bed and wake up and see his grandchildren,” said Manyi.

A few weeks ago the Jacob Zuma Foundation reached out to Zuma’s supporters to ask for donations to cover his mounting legal bills.

He pleaded with supporters to continue making their donations and said a “good amount” has been raised so far.

“At this stage, we are not going to disclose to the public how much has been raised but maybe later when we are close to the target. Right now it's still early days,” he said.

What are your thoughts on Zuma’s release on medical parole?

'We've heard that he is not well': Ramaphosa welcomes Zuma's parole

‘Another Schabir Shaik situation’ or the right move? SA reacts to Zuma’s release on medical parole

The release of former president Jacob Zuma from prison on medical parole has garnered mixed reactions from scores online.
News
4 months ago

The SA Prisoners Organisation for Human Rights has urged the correctional services department to also afford medical parole to ill prisoners in the ...
News
4 months ago