Magashule had no authority to suspend Ramaphosa: Court ruling

No prospects the Supreme Court of Appeal can find differently 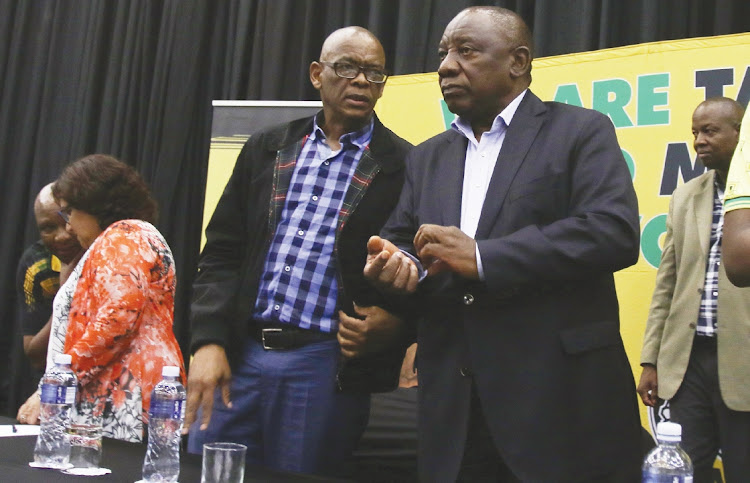 Suspended ANC secretary-general Ace Magashule’s attempt to suspend his party boss, President Cyril Ramaphosa, was not only null and void but the embattled Magashule had no authority to trigger such action.

This is according to a full bench judgment of the Johannesburg high court, which dismissed Magashule’s request to go to the Bloemfontein-based Supreme Court of Appeal (SCA) to have his suspension set aside and his attempted suspension of Ramaphosa affirmed.

In July the high court affirmed the ANC’s suspension of Magashule from his position.

However, he sought to dig in his heels, arguing that he believes the SCA can find differently on, among other grounds, his purported suspension of Ramaphosa.

Magashule argued that he suspended Ramaphosa on the authority of the ANC national working committee (NWC) and used the party’s rule 25.70 to effect such an action.

Suspended ANC secretary-general Ace Magashule's counsel, advocate Dali Mpofu, was not telling the truth in his submission that President Cyril ...
News
4 months ago

The court said Magashule was never authorised by the NWC to pull the trigger on Ramaphosa, and that his alleged reliance on rule 25.70 was completely misplaced.

“The applicant [Magashule] did not act on the authority of the NWC. It was never given,” reads the court judgment.

“And rule 25.70 only applies to persons who have been indicted. [Ramaphosa] had not been charged with any offence.”

The court further charged that even Magashule’s new grounds for his purported suspension of Ramaphosa raised in his reply papers in the application for leave to appeal — that he acted on powers delegated to him by the ANC national executive committee (NEC) — were baseless.

“Besides this ground being impermissible raised only in reply, [Magashule] did not provide any proof that the NEC delegated such powers to him and did not show whether such delegation was still in force.”

Therefore, Magashule’s allegations that he had the backing of the NWC and NEC in attempting to suspend Ramaphosa were unfounded.

“It was clear he had no authority to do so. This ground of appeal is also without merit.”

'We don't know what will happen to us': Ace's students in Turkey evicted as money dries up

Suspended ANC secretary-general Ace Magashule has left SA's mission to Turkey red-faced after the students his foundation sponsored to study in that ...
News
4 months ago

The suspended ANC secretary-general has accused the NPA of delaying tactics, saying his trial is a political plot
Politics
5 months ago