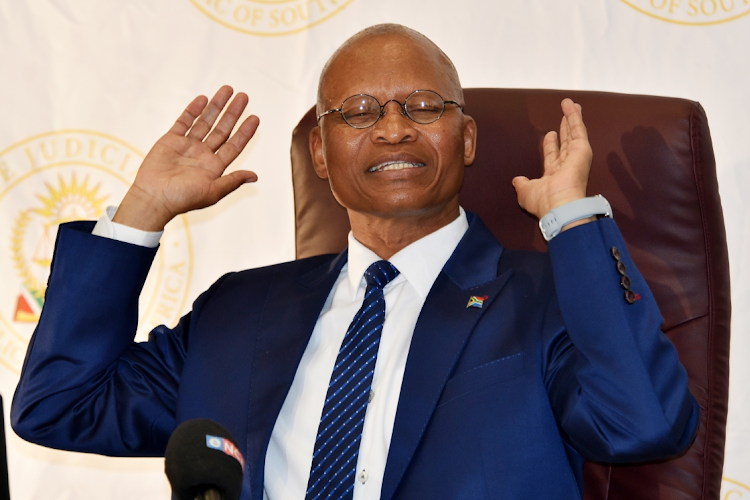 In nominating a candidate to replace chief justice Mogoeng Mogoeng, you must include reasons why the person is suitable, as well as 'their experience both as a legal practitioner, including any experience as a judge, and as a leader'. File photo.
Image: Freddy Mavunda

In less than a month, often-controversial chief justice Mogoeng Mogoeng will vacate the judicial hot seat – and on Thursday, President Cyril Ramaphosa invited all South Africans to nominate his replacement.

It was a move, the presidency said, to “promote transparency and encourage public participation”.

Ramaphosa, ultimately, will make the final decision in consultation with the Judicial Service Commission and the political parties represented in the National Assembly, but he has asked South Africans to put forward “suitably qualified” candidates fit for the job.

In explaining the process, the presidency said: “Any person may nominate candidates for the position of chief justice. These nominations should be accompanied by the endorsement and support of at least one professional body of legal practitioners, or non-governmental organisation working in the field of human rights, or other legal areas.”

This should also include reasons why the person is suitable for the post, as well as “their experience both as a legal practitioner, including any experience as a judge, and as a leader”.

Who should be the next chief justice and what qualities and attributes should be expected of the head of the judicial branch of government?
News
8 months ago

Nominations and supporting documents should be sent to angeline@presidency.gov.za and cjnominations@gcis.gov.za by October 1. The e-mail should contain:

“All nominations and supporting documents (save for personal information) will be made public on the presidency website by October 4. Any objections to the nominees will need to be motivated, in writing, and sent to the above e-mail address at the latest by October 15,” the presidency said.

It is here that the public participation process comes to an end.

Once the nominations have been made, a panel – made up of “eminent persons” – will shortlist between three and five candidates. They will have to submit their report to Ramaphosa by October 29. On the panel will be:

The panel will be required to report to the president by October 29.

Western Cape judge president John Hlophe has urgently gone to court for an interdict to stay parliament's impending impeachment process against him ...
News
8 months ago

“The president will decide which candidates from the shortlist presented to him by the panel of eminent persons to refer to the Judicial Service Commission and the leaders of political parties represented in the National Assembly for consultation, as required by the constitution, before appointing the new chief justice,” the presidency said.

SA's constitution describes the job of the chief justice as being “the head of the judiciary”, and an individual that “exercises responsibility over the establishment and monitoring of norms and standards for the exercise of the judicial functions of all courts”.

The person is also responsible for “leading the creation of jurisprudence as he or she presides over proceedings of the Constitutional Court”.

“He or she is also responsible for setting and overseeing the maintenance of the standards for the exercise of the judicial functions of our courts, and chairing the Judicial Service Commission,” the presidency said.

Ramaphosa said: “The chief justice occupies a vital position in our democratic constitutional order. It is therefore appropriate that all South Africans should have an opportunity to witness and participate in the selection of the next chief justice.

“We expect that this process will further deepen public confidence in the independence and integrity of the judiciary.”

The EFF said it rejected the composition of the panel, saying that it was made up of "questionable characters".

"What would appear as an unprecedented noble call for public participation is now marred by the inclusion of questionable characters that Ramaphosa has chosen to preside over the shortlisting process. The Judicial Service Commission is the sole institution for the selection process of judicial officers and, at most, Ramaphosa could have deferred to that body," the party said in a statement.

It added that the people on the panel were chosen to ensure that the judiciary was captured "by proximity" by those who funded Ramaphosa's ascendancy to power.

"All senior judicial officer aspirants have subjected themselves to the rigorous and robust process at the JSC. This incoming chief justice cannot be an exception should Ramaphosa make this selection process a public participation. The composition of the panel smacks of nepotism and disbursing of patronage for a predetermined outcome," the party said.

Parliament has approved a motion for National Assembly speaker Nosiviwe Mapisa-Nqakula to be admitted as a member of the Judicial Service Commission.
Politics
8 months ago

The Constitutional Court's dismissal late on Friday of an application by the Electoral Commission of SA (IEC) to postpone local government polls to ...
Opinion & Analysis
8 months ago

The recent Judicial Service Commission interviews for the ConCourt were a “sham”, says the Council for the Advancement of the South African ...
News
10 months ago