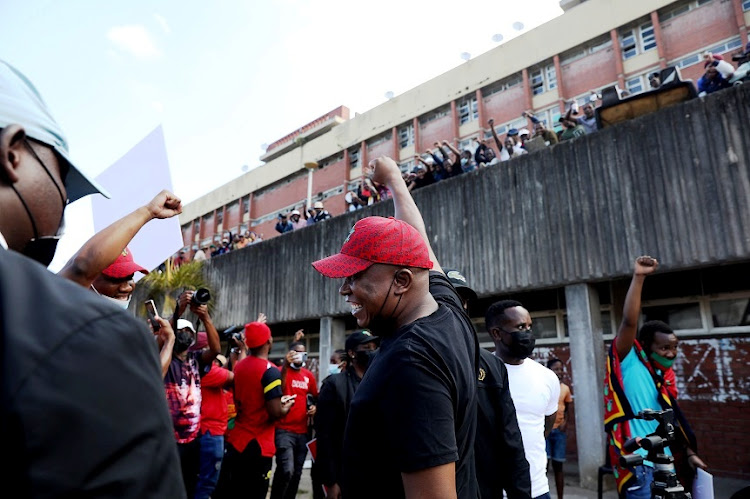 Julius Malema toned down his racial rhetoric on Saturday when he visited the predominantly Indian township of Phoenix in Durban for the first time since 36 people were killed there in the July unrest.

The EFF leader, who two months ago said if the police did not “find the Indians” who had killed people the EFF would do so, called for peace.

The Phoenix killings took place during riots and looting in KwaZulu-Natal and Gauteng that left more than 300 people dead and hundreds of businesses destroyed.

The Phoenix deaths were understood to be a result of historical racial tensions between black African and Indian communities allegedly exploding into vigilante groups targeting black Africans.

POLL | Do you agree with the EFF's march in Phoenix?

EFF secretary-general Marshall Dlamini said on Thursday the party will deal "decisively" with racism in Phoenix.
Politics
9 months ago

Despite a soft tone from the routinely fiery Malema, especially on race matters,  he acknowledged that “innocent people lost lives here in Phoenix but that must not be attributed to every Indian you come across, because to do that amounts to self hate. There are lots of Indians against that.”

Malema described the acts of violence as “barbaric” and said people who carried rifles and live ammunition and enjoyed shooting at innocent people ``must be brought to book.

“I am here to say despite what happened, we belong together and we will overcome all these challenges together. I am happy to see the EFF here.”

“People are desperate for jobs and these jobs must not be given to relatives and members of certain political parties,” he said.

The EFF leader encouraged members to campaign and enter every home, even homes of ANC members.

He also visited voter registration sites in KwaMashu, Umlazi and Welbedacht, west of Chatsworth, where he continued to call on members to encourage others to register to vote, especially the youth.

‘Army should look for the powerful, not the weak’: Julius Malema on looting, Phoenix killings

The EFF leader says the government took food out of the mouths of the poor.
Politics
10 months ago

They claim to care about the poor. They don’t. They want to loot, oppress and get away with it
Opinion & Analysis
10 months ago