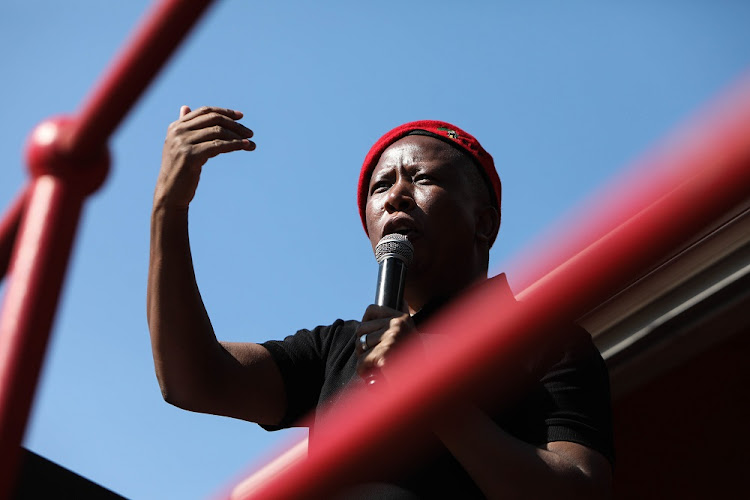 EFF leader Julius Malema and prominent lawyer Dali Mpofu would be among the wealthy people an EFF government would target for a special wealth tax to subsidise indigent families.

Malema told hundreds of supporters gathered in Johannesburg on Sunday for the party's manifesto launch ahead of the November 1 local government elections that every EFF-governed municipality would implement a property wealth tax - a special tax where the wealthy would subsidise indigent families.

“The people with big yards and big houses, we are going to tax them because they are rich. They must subsidise the poor,” he said.

“How do we determine that this person is rich. Dali Mpofu is going to be the first victim of the property wealth tax because he lives around Mandela's home in Houghton,” said Malema.

“We are going to tax them including myself. I stay in Sandton. I must pay the wealth tax to subside the poor. That is the only practical way to share the wealth of the country.

“We said the wealth of the country must be shared and the rich must share with the poor and they shall do so through the property wealth tax that the EFF municipality is going to implement,” he said.

Malema said the EFF manifesto was based on an observation that people were landless, jobless, local government was incapable and many people in SA still did not have access to water.

The EFF launched its 2021 local government elections manifesto in Gandhi Square in the Johannesburg CBD on September 26 2021. The EFF contested elections for the first time in 2014 during the national polls and became the third most popular party in the country. EFF leader Julius Malema addressed his supporters at the launch.

He said the EFF had also observed that many people still stayed in shacks with no toilets, did not have electricity, access to quality primary health care, roads were not tarred, and those that were had potholes.

“Our manifesto is based on a truthful observation that children do not have access to clean and safe recreational and sporting facilities, that instead of creating jobs for millions of jobless young people, municipalities give tenders to the connected few and our people do not have access to sanitation and proper toilets,” said Malema.

“Land and jobs manje [now]” is the party's slogan for the elections campaign. It was “land and jobs” in previous elections.

The EFF is unveiling its 2021 local government elections manifesto in Johannesburg on Sunday.
Politics
8 months ago

Malema said in rural SA, children continued to fall to their deaths in pit toilets.

“It is on this basis that we make the clarion call here on September 26 2021 that we want our land and jobs manje,” he said.

In a slew of promises with a slant towards the poor, Malema said the EFF would identify a piece of land in Sandton to build RDP houses to promote integrated human settlements.

EFF-governed municipalities would not stand by and do nothing about sanitation and toilets in schools because education and schools were functions of national and provincial governments. The EFF would go beyond the functions of a municipality to help all people in need.

“There will never be pit toilets in schools that fall under EFF municipalities,” he said.

Malema said the EFF manifesto was drafted with input from people across all sections of society, including students, professionals, experts and ordinary people in communities across the country.

In his 92-minute speech, Malema cited specific service delivery concerns raised by different communities that the party consulted in drafting its promises.

In Tshwane, for instance, the people of Hammanskraal told the EFF they wanted water, he said.

“The people of Tshwane want the municipality to tar their roads in Extension 7 and 8 in ward 90, they want a clinic in Kopanong ward 89 and the people of Mbuyiseni Ndlozi informal settlement in ward 25 want electricity,” he said.

He said the people of Thaba Nchu in Mangaung municipality told the party they wanted water and electricity while the people of eThekwini said they wanted a dumping site in Mashwase area in ward 3 closed and their area cleaned.

“They also said they want all the sewer pipes and storm water drainage in Zamani and Woodglen in ward 6 replaced,” said Malema.

Malema claimed that over the past five years, and despite not being in government, the EFF had made a difference where it was represented. The achievements included motions which were adopted by municipalities.

In the Buffalo City Metropolitan council, EFF councillors tabled a motion for the council to complete Amalinda Housing Co-operative. Malema said the EFF motion was adopted, and the municipality completed the project.

Among the promises were that:

Households that depended on social grants would qualify for free basic services without having to register on the indigent database. The EFF would continue to fight for the increase of social grants.

He said all qualifying learners from indigent households would automatically qualify for municipal bursaries.

Malema would also like municipalities to have anti-corruption units headed by men or women of integrity. He said his party would increase municipal internal audit capacity to enhance efficiency and effectiveness in governance and to pre-empt all forms of corruption.

The EFF launched its 2021 local government elections manifesto at Gandhi Square in the Johannesburg CBD on Sunday.
Politics
8 months ago

A township in North West is an example of the plight of people being denied a basic human right: going to a decent toilet. It is one of many such ...
News
8 months ago

EFF leader Julius Malema will be laying a complaint of political intolerance with the Electoral Commission of SA (IEC) after ANC members allegedly ...
Politics
8 months ago