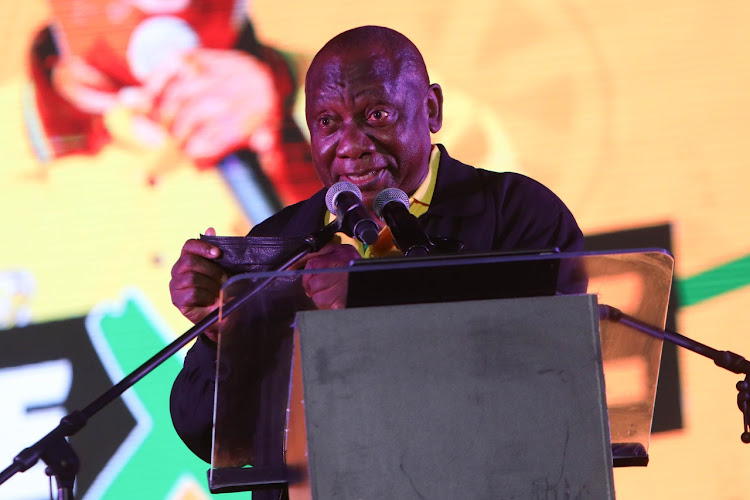 ANC president Cyril Ramaphosa launched an attack on how the DA runs the city of Tshwane, as he called on voters to re-elect his party to govern the country's capital city.

Ramaphosa was speaking to ANC supporters on Monday night at Church Square in the Tshwane CBD as he unveiled his party's electoral manifesto ahead of the municipal elections due to take place on November 1.

Ramaphosa said since the DA ousted the ANC from the Tshwane metro municipality back in 2016, service delivery has deteriorated in the country's administrative capital.

Under the DA, Ramaphosa said, Tshwane residents have been living under many hardships including with little access to clean water among other issues he flagged.

He said that Tshwane residents decided against voting for the ANC five years because they had been disappointed about how they ran the city, including the levels of corruption.

“As a result, a number of cities and towns, including Tshwane, have been governed by other parties for the past five years. This has caused great hardship for the residents of Tshwane,” Ramaphosa said.

Ramaphosa said people in areas such as Atteridgeville, Laudium and Hammanskraal face long periods without water to flush their toilets, cook and drink.

President Cyril Ramaphosa delivered the ANC's local election manifesto at Church Square in Tshwane on September 27 2021. In the lead up to the November 1 municipal elections, Ramaphosa outlined the party's intended responses to various challenges that SA faces.

“Just last week, water in Laudium and Atteridgeville was cut off yet again for nearly eight days. Once more families could not wash, could not flush their toilets,” he said.

“In many areas of this city, rubbish is not collected regularly and lies in huge dumps attracting flies and rats,” Ramaphosa said. “Informal settlements have not been upgraded and the city has failed to make land available so that residents can have serviced stands and move out of inhumane settlements on dolomitic land.”

According to Ramaphosa, the party wants Tshwane residents to give it a chance to fix the dismal failure of the DA, hence they deliberately chose Tshwane to launch their manifesto.

Ramaphosa promised that the party will do better as it was doing things differently this time.

He said the process of fielding councillors has changed where the party was selecting capable people and that only qualified municipal officials would be installed.

Ramaphosa launched the ANC manifesto in Tshwane’s city centre to hundreds of supporters on Monday evening under the theme “building better communities together.”

“And so, we come to you today, and call on you to come out and vote for the ANC so that we can again govern here in Tshwane and in many other towns and cities.

“We ask this so that we are able to put the programme of social and economic transformation back on track. We have come a long way in our young democracy, but much remains to be done,” Ramaphosa said.

As Ramaphosa was completing his speech, he said there were people with protesting placards that he wanted to see.

The placards were in protest of the DA government. Some of them were from municipal employees who said they were suffering.

One placard read: “Mr President we demand your intervention. No work, no vote. Emancipate municipal workers. City council is in denial, poor administration.”

President Cyril Ramaphosa has promised that job creation will be the ANC's priority should it be voted in to run municipalities.
Politics
8 months ago

'I've only seen him on TV': Zinhle, 7, overjoyed to meet Ramaphosa

"Ramaphosa said to me I should go to school and grow up to be an ANC member."
Politics
8 months ago

President Cyril Ramaphosa committed to addressing the scourge of joblessness in the country.
Politics
8 months ago