“He has served the nation well, and I think as much as we want to be gung-ho and send him to the gallows, we do need to also recognise some of the things that he has done,” ANC president Cyril Ramaphosa said on Wednesday. 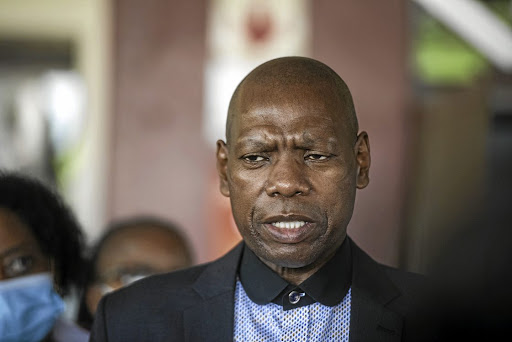 ANC president Cyril Ramaphosa on Wednesday defended former health minister Zweli Mkhize, saying the fact that he was implicated in the damning Digital Vibes scandal did not take away the contribution he made in the fight against the Covid-19 pandemic.

The president of the ruling party was responding to a question on why he thanked Mkhize for his services in government during the recent cabinet reshuffle, despite the former health minister being implicated in wrongdoing in a damning Special Investigating Unit investigation into the R150m Digital Vibes saga. The SIU report was released publicly on Wednesday.

Speaking at an impromptu media engagement at the ANC’s headquarters after the launch of the party's local government election manifesto in Tshwane on Monday, Ramaphosa said Mkhize had been instrumental in steering the state's response to the pandemic, as well as securing vaccines.

“I think many people remember how he really served the nation. I may well have been the face, but he was the soul ... and we were able to navigate our way around the pandemic because of his experience and having served also in other positions.

“I remember very well when he was the health MEC in KZN, when we were going through a period of [HIV/Aids] denialism, he took a different path that finally defined the way that we responded to HIV. So I think that needs some recognition, but at the same time he has resigned and ... we need to give recognition to that,” Ramaphosa said.

Ramaphosa was quizzed about the Digital Vibes report, which was given to him three months ago. On why he took so long to release the report, Ramaphosa said he was a “process person” and that people needed to be given an opportunity to respond.

“I am a process person. I am firmly rooted in doing things in terms of process, and we need to look at that report, look at the suggestions and the recommendations that have been made, and do things in a processed manner and in a manner that, in the end, will be fair and give people and opportunity to be able to respond, so that whatever wrong that has been done should be followed through and there should be consequence management based on the measure of good fairness,” he said.

President Cyril Ramaphosa delivered the ANC's local election manifesto at Church Square in Tshwane on September 27 2021. In the lead-up to the ...
Politics
4 weeks ago

Ramaphosa added that he did not believe that the timing of the release of the report would have a negative impact on the ANC heading into the November 1 polls.

“The ANC has committed itself to act against corruption. That is a clear policy position. This is precisely what the ANC stands for, so I don’t see this affecting the ANC negatively,” he said.

In fact, he said, this will paint the party in a good light.

“People will say hitherto [that] we have been very light on taking action against people who have done some wrong. We are now doing things differently. We are after up and... we may not really be able to do it with the pace and the intensity that you may want to see but, truth be told, we are acting on it,” he said.

Ramaphosa added: “Our slowness, our stickling for process, should not be misunderstood for being reluctant and not wanting to do it. It should be seen for what it is, and that we are determined to do it.”

Tahera Mather and Naadhira Mitha used Digital Vibes as a 'front' to hide the fact they were bidding for the NHI and Covid-19 communication contract, ...
News
4 weeks ago

Thousands march through Durban in support of their choice in leadership dispute, amid Covid superspreader fears
News
4 weeks ago