'If they say I must run, I will run again': Mabuza ready to stand for ANC deputy president next year 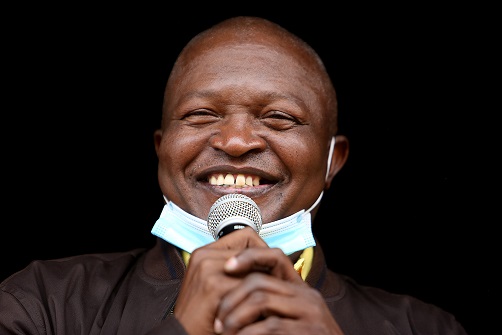 Deputy President David Mabuza says he is ready to run for the position again next year, opening up an ANC succession debate in the middle of local government campaigning. File photo.
Image: Alon Skuy

Deputy President David Mabuza has opened an ANC succession debate in the middle of crucial municipal election campaigning, saying he could run for the same position next year if “the people” say he must.

He was speaking on the sidelines of a campaign trail in Mamelodi, Tshwane, on Thursday.

Responding to questions, Mabuza said he would not impose himself on a second term – but that he was open to retaining the position.

“It will be the decision of the people. I never imposed myself on this position. I was elected by the people. They said I must come and serve. It will be the same. If they say I must run, I will run again. If they say, 'No, we have got another candidate,' I will accept it because the will of the majority must be respected,” he said.

Mabuza's campaigning came the day after President Cyril Ramaphosa authorised the public release of the SIU report into the R150m Digital Vibes saga. The 114-page report revealed gross misconduct on the part of former health minister Dr Zweli Mkhize, his family members, senior health officials and some of the minister's associates.

Mabuza said the law must take its course regarding the scandal.

Many residents and ANC members in the area came out to listen to Mabuza and air their grievances, notably over lack of service delivery, unemployment and high crime.

“I heard all your problems and we will fix them,” the deputy president said.

Mabuza used the campaign to urge residents to vote the ANC back into power after loosing the Tshwane council to the DA in the 2016 local government elections.

The party has been hard at work trying to convince potential voters to trust it and regain control of metros it lost in the elections. The only metros the ANC governs with a majority are eThekwini (Durban), Buffalo City (East London) and Mangaung (Bloemfontein). It runs Johannesburg and Ekurhuleni through coalitions.

“People of the ANC, you know a mistake happened in 2016 and the DA took over. That is why we are struggling [with service delivery]. Let us vote and take our Tshwane back so we can talk about how we can improve the issues of service delivery,” Mabuza said.

Mabuza did not make a slew of promises, other than that he would ensure that police minister Bheki Cele went to the area to attend to their crime issues. He also admitted that some problems, including unemployment, required collective efforts from different sectors.

Mabuza recently undertook a six-week trip to receive medical attention in Russia, and told journalists that his health was no concern as he had doctors taking good care of him.

ANC president Cyril Ramaphosa has described the failure to pay party staff as a “sore point” that keeps him awake at night.
Politics
3 weeks ago

Carl Niehaus will this weekend start campaigning for the ANC ahead of the November 1 local government elections after the party reinstated his ...
Politics
3 weeks ago

'Once you register I'll come back to tell you who to vote for': Deputy President David Mabuza

“One day I will come back and tell you, once you have registered, who to vote for. I will tell you that day when I come back. For today, please can ...
Politics
1 month ago