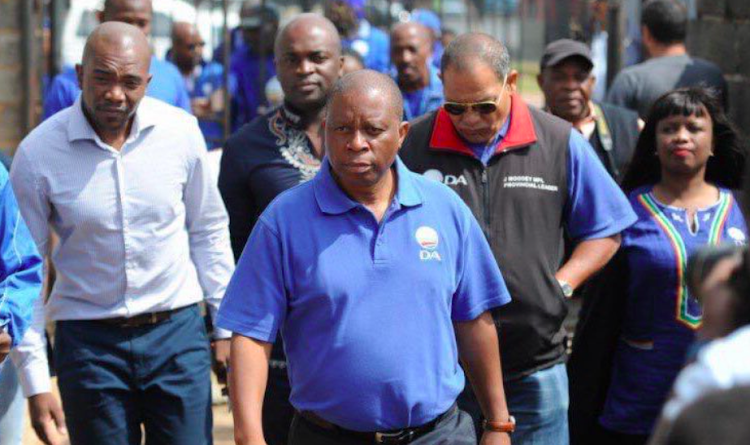 Former DA MP Phumzile Van Damme's throwback picture from her tenure in the party has got social media deep in the feels.

Van Damme, on Thursday, shared an old picture of her side-by-side with other former members of the official opposition party, including Herman Mashaba, Mmusi Maimane and John Moodey. The picture included the DA's current Gauteng leader Solly Msimanga.

“Was looking through my photos. Throwback to the 2016 local government elections. Look at us looking like the cast of The Indispensables (pun intended). One man left standing,” she joked.

Was looking through my photos. Throwback to the 2016 local government elections. Look at us looking like the cast of “The Indispensables” (Pun intended)

Van Damme said the picture was cool enough to be framed, adding that there was no bitterness regarding her past.

“Come on, it’s such a cool photo. Admit it, don’t lie! I’m going to frame it. No hard feelings. Only memories. Why look back on the past with bitterness? What a waste of energy.”

Van Damme left the DA earlier this year after she was allegedly told to “lay off Facebook” by DA chief whip Natasha Mazzone. On social media, Van Damme made serious claims about how Mazzone allegedly tried to block her from going after social media company Facebook, after the US-based company earlier this year decided to pull out of attending a portfolio committee meeting.

Moodey threw in the towel as DA Gauteng leader last year. In his resignation speech, Moodey said the DA was “no longer a home” for him and he was even struggling to sleep in the party's T-shirt.

“I can no longer drive my end for a better SA in this environment. And I’m aware of many more DA members who feel the same way I do,” he said.

Maimane and Mashaba both resigned from the DA in 2019 and formed One SA movement and ActionSA respectively.

Taking to Van Damme's comment section, some made light of the picture and others shared how things have changed since then.

Did they sign a blood bond with the DA? In the same way parties campaign to ask people to leave their parties of choice, this bitterness at people who leave the DA is not a good look. Grace. Chill. People leave political parties all the time. Simmer down 🙄

That was a hands down the coolest political ad ever that one!

We sure did! I look back with pride. We worked our damn butts off and achieved something great, something previously thought unachieavable. Good times 🤘🏾

Perhaps the true greatness will be revealed this election and the growth will supersede what was achieved in 2016. That’s the narrative that’s been shared, right? Let’s keep quiet & let those who know best show us what the true DA is. A winning one.

I can’t speak for other people, ntanga. I can only speak for myself. I can venture that many people poured their lives and souls into the DA & were displeased and expressed their legitimate feelings. We can’t tell people how to feel & how to express themselves. Abantu abafani.

"The report should have immediately been followed by the very public and embarrassing arrests of those involved," said Mashaba.
Politics
2 weeks ago

Steenhuisen proud of DA's recovery since Maimane 'turned his back'

DA leader John Steenhuisen says the party has recovered from the 2019 crisis when its erstwhile leader Mmusi Maimane quit months after a disastrous ...
Politics
3 weeks ago

"You think we just listen to Mandela speeches on repeat?"
TshisaLIVE
1 month ago