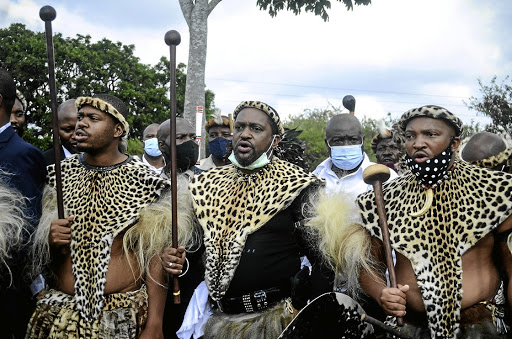 Zulu King Misuzulu. The IFP has accused the ANC in KwaZulu-Natal of trying to erode the office of the king.
Image: Sandile Ndlovu

The IFP has accused the ANC of undermining the Zulu monarchy.

IFP spokesperson Mkhuleko Hlengwa said in a statement on Sunday that, as the official opposition in KwaZulu-Natal, the party was concerned over the behaviour of the ANC  government towards the Zulu monarchy.

“We further raised concerns over the withdrawal of the king’s security, the disbanding of the royal household department, and the reduction of resources made available to the Zulu monarch,” Hlengwa said.

Hlengwa said the ANC government in the province did not respond to any of the substantive issues raised by the IFP.

“They neither denied nor explained their behaviour towards the Zulu monarch. This leaves the issues firmly on the table, with our original question still unanswered: Why is the ANC hell-bent on alienating the Zulu King?” Hlengwa said.

Hlengwa said this was not about the present king, but about the institution of the monarchy.

“It is about the office of the king, for it is that office that the ANC government in KwaZulu-Natal is trying to erode.”

Hlengwa said 27 years into democracy, the role, powers and functions of traditional leaders have never been enshrined in a single piece of legislation.

“The IFP has championed this issue for years. We have not suddenly decided to speak up for the monarchy because we think it will gain political mileage. This is not about politics.”

He said this was about being accountable for governance decisions that will affect the dignity of millions of people.

The core message of the IFP manifesto includes having leaders of integrity who will provide electricity, water, housing and ensure food security, ...
Politics
7 months ago

Tributes have been pouring in after the death of NFP leader and founder Zanele Magwaza-Msibi from cardiac arrest.
Politics
8 months ago

President Cyril Ramaphosa’s address to the nation on Sunday night was not received without criticism.
Politics
9 months ago