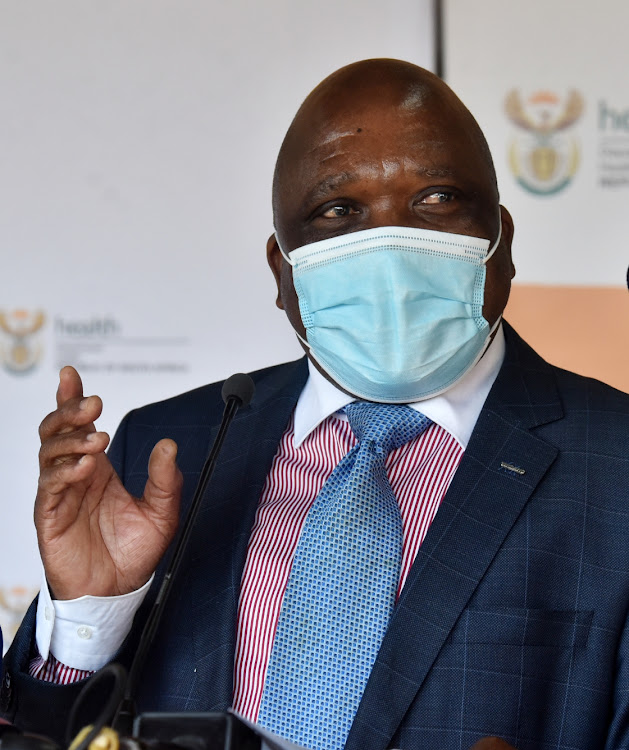 Health minister Joe Phaahla has told parliament's portfolio committee on health that he would like action against officials implicated in the Digital Vibes scandal to be concluded by the end of October. File photo.
Image: Freddy Mavunda

The recent suspension of several high-ranking health officials implicated in the Digital Vibes fraud scandal should not impact on the stability of SA’s vaccine rollout programme.

Parliament’s portfolio committee on health has called on the Department of Health to put contingency measures in place to ensure that the suspensions will not negatively influence the management of processes to ensure that the entire population is vaccinated.

During the week the Special Investigating Unit (SIU) was authorised by President Cyril Ramaphosa to make public its scathing report on the breach of procurement procedures and National Treasury’s note regarding the awarding of the Department of Health’s Covid-19 communications contract.

This saw Digital Vibes — a company belonging to close associates of former health minister Zweli Mkhize — being improperly awarded the contract for an inflated R150m.

The portfolio committee chairperson Kenneth Jacobs invited the department to present a detailed report on how the scandal had unfolded, as well as the department’s plan of action to deal with it, timelines and the consequence management processes.

This was to ensure that the health department’s credibility and the country’s vaccine rollout programme is not hampered by the suspension of director-general Sandile Buthelezi as well as other senior personnel.

Acting director-general Nicholas Crisp said irregularities over the Digital Vibes contract had come to the department’s attention after whistle blowers raised their concern about the breaching of processes in awarding the vaccination rollout communication strategy contract to Digital Vibes, as well as the inflating of the amount paid for the services.

This was confirmed by an investigation carried out by the auditor-general and led to the precautionary suspensions (on full pay) of six health department officials including deputy-director Anban Pillay and senior spokesperson Popo Maja.

Core findings made by the SIU were that there were irregularities in the awarding of the tender, procurement processes had been flouted, there were massive conflicts of interest and R150m was paid out in fruitless expenditure. All this while the country battled through the ongoing Covid-19 pandemic.

Crisp assured the committee that the department had taken the matter to court, charges were being formulated against the implicated officials, and the health department was going after Digital Vibes to pay back the money.

The committee responded by informing the health department that the suspensions were not enough and accountability and consequence management must also be implemented so that the state was not landed with the huge cost of paying salaries to the suspended officials.

Health minister Joe Phaahla said he wanted the matter concluded by the end of October, but that disciplinary processes had to be followed correctly in terms of the Labour Relations Act to ensure the process was not tainted and could not be challenged in future.

Mkhwebane finds major issues at SA hospitals, but happy that authorities are dealing with problems

During visits to hospitals, the public protector's office identified a variety of shortcomings, including poor physical infrastructure, staff ...
News
7 months ago

The health ministry is on Thursday responding to the contents of the damning Special Investigating Unit report on Digital Vibes.
Politics
7 months ago

‘I had absolutely no role’: health minister Joe Phaahla on Digital Vibes

Health minister Joe Phaahla said on Thursday he did not play any role in either the appointment or the implementation of the Digital Vibes contract.
Politics
7 months ago