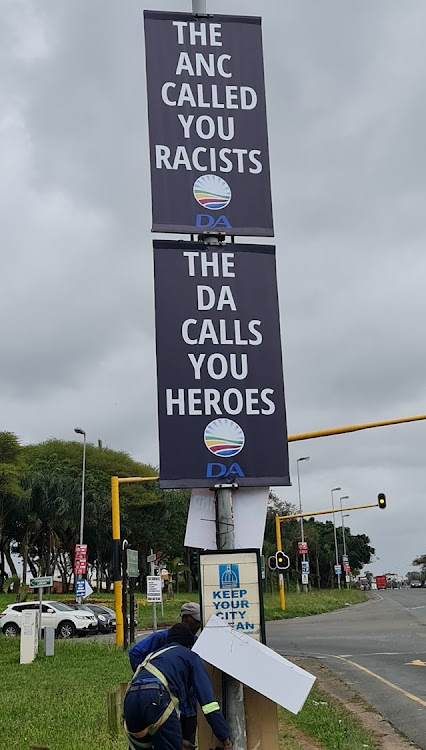 As the race to the polls for local government elections heats up, racial tension in Phoenix after recent civil unrest is being used as a means of campaigning for political parties in KwaZulu-Natal.

On Tuesday, reaction to the DA election posters were put up in Phoenix, north of Durban. Racial tensions within the community there erupted during unrest and rioting in Durban in July as 36 people lost their lives — 30 of them shot.

DA provincial chair Dean Macpherson said the posters were going up all over the city and the intention was not to create further division among residents.

“It's a matter of fact that the ANC has called people all over the city of Durban racist. We disagree with this sentiment. We agree that they were heroes. They were the blue line between absolute anarchy and the sheer lack of law enforcement during July's unrest. The citizens of this city were heroes.”

He said the DA in no way condoned lawlessness, which included the shootings and killings in Phoenix.

“We've been very clear that anyone who has transgressed the law must go through the judicial process. The law must take its course and we see where that process goes.”

Macpherson referred to Phoenix brothers Dylan and Ned Govender and fellow resident Jeetendra Jaikissoon, who have been charged with the murder of an Amaoti resident in July.

African Democratic Change leader Visvin Reddy has rubbished claims by the ANC which suggest his party was fuelling racial tensions with a recent ...
Politics
3 weeks ago

ANC provincial spokesperson Nhlakanipho Ntombela has slammed the DA's “racist” posters as an attempt to gain votes without “respect for human life”.

“The wounds are still bleeding after the recent massacre of people in Phoenix. We must all reject criminals and the massacre of innocent people. Therefore it is opportunistic of the DA to perpetuate crime and support people accused of murders. However, the ANC will continue with its project of building social cohesion through community, governmental and organisational programmes by different racial groups across the province. ”

Ntombela said what the DA had done in Phoenix was “undisputable” in undermining the ANC's goal of building a united society.

“The ANC calls on the citizens to strive to end racial exploitation by the DA that plays with their emotions. We believe that members of the public should have a strong content that deals with social cohesion and need for racial harmony.”

Reddy accused the ANC of trying to divert attention from critical issues instead of taking responsibility for its role in the riots and looting.

President Cyril Ramaphosa says the violent protests and looting that broke out in the country recently shook SA's belief in itself as a united nation.
Politics
1 month ago

Julius Malema toned down his racial rhetoric on Saturday when he visited the predominantly Indian township of Phoenix in Durban for the first time ...
Politics
1 month ago

“For a year-and-a-half we have been in campaign mode. During the pandemic we have been on the phones talking to voters, asking them to register to ...
Politics
1 month ago