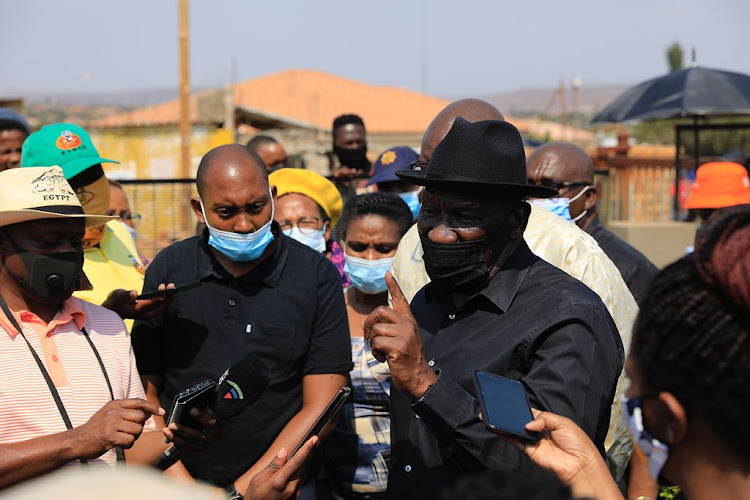 Police minister Gen Bheki Cele said there are politicians who use violence and intimidation tactics to have their preferred candidates contest elections in Tshwane.

As a result a special task team has been established in the area for potential attacks and threats linked to political violence in the lead-up to the November local government elections.

This comes after the police ministry led two community engagements in the form of a street imbizo hosted in Mamelodi and Mabopane. These areas have been identified as hotspots for potential attacks

According to the SA Police Service, during the imbizo, community members had the opportunity to express some of their policing concerns and needs to Cele, deputy minister Cassel Mathale, Gauteng community safety and liaison MEC Faith Mazibuko and a national and provincial SAPS management team.

While many residents were concerned about the increase in contact and gender-based violence related crimes, some community members also spoke out about their security concerns after the murder of ANC ward councillor Tshepo Motaung in Mabopane last month.

Family, community members and comrades on Thursday held a memorial service in Mabopane to celebrate the life of slain councillor Tshepo Motaung.
News
7 months ago

Cele did not mince his words as he assured residents that politicians using criminals to influence democratic processes cannot and would not be tolerated.

“There are people who want to be councillors, not on behalf of the people in the community but on behalf of criminal syndicates so that the thugs they serve can continue to terrorise and extort businesses in the area.

“There are also politicians who are trying to have their preferred candidates contest elections and believe that using violence and intimidation tactics is going to work. It won’t. We are going hard on this phenomenon. The SAPS and the detective team that has been appointed will ensure that everyone who is involved in these crimes is dealt with accordingly,” he said.

Residents also called on the police to bring services closer to them and as a result a mobile police station in the Kopanong area has been opened. This station will service the growing informal settlement along with the existing police station in Mamelodi East.

In addition, tactical response teams have also been deployed as force multipliers in both Mamelodi, Mabopane and surrounding areas.

The police ministry said they believe the additional boots on the ground will also go a long way in dealing with tension and threats before, during and after the November elections.

Gauteng co-operative governance and traditional affairs MEC Lebogang Maile has maintained that he had no choice but to place the Tshwane municipal ...
Politics
7 months ago

DA leader John Steenhuisen says he will intensify the party's election campaign in Gauteng as he fears it could lose control of Tshwane as other ...
News
7 months ago

A local election dispute saw protesters take to the streets early on Thursday, blocking roads with burning tyres and rubble around Kgosi Mampuru ...
News
7 months ago