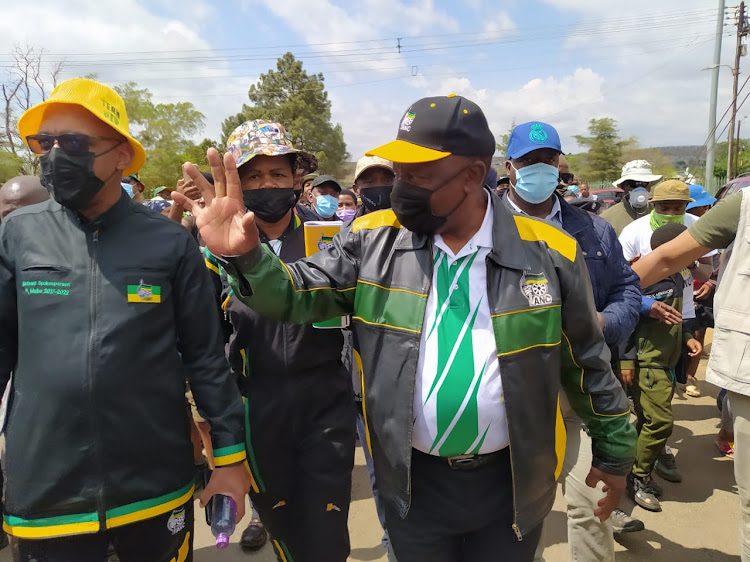 "We want municipalities to work for the people," President Cyril Ramaphosa said on Friday while campaigning for the upcoming elections.
Image: Amanda Khoza

President Cyril Ramaphosa plans to use the 2021 local government elections as a “unifying force” for the ANC.

Speaking on the sidelines of an election campaign in Potchefstroom in the North West on Friday, Ramaphosa said the ANC must do away with factionalism.

“We are against factions and I am urging, as president [of the ANC], everyone to belong to one faction and that faction is a united ANC. That is the only faction that I know. This moment of the election, is a great moment for the ANC because it is uniting all of us,” he said.

With just a few weeks until South Africans go to the polls on November 1, Ramaphosa said he is using every moment he gets to encourage citizens to exercise their constitutional right to vote. On Friday, Ramaphosa spent the day in the North West where he conducted door-to-door canvassing to encourage the locals to vote for the ANC.

On Friday, his campaign began with a briefing from the interim provincial committee in the Promosa area in Tlokwe where he was brought up to speed with some of the challenges facing local municipalities and the provincial leadership.

Recently, the province was plagued by a leadership scandal when newly elected North West premier Bushy Maape replaced Job Mokgoro. Maape was brought in by the ANC to replace Mokgoro after the former premier fell out with the interim provincial committee.

Water, homes and jobs. This is what 60-year-old Marie Abrahams from Promosa in the Tlokwe area demanded from ANC president Cyril Ramaphosa when she ...
Politics
10 months ago

Mokgoro took charge of the province in 2018 after the resignation of then ANC provincial chairperson Supra Mahumapelo, who was forced out of office after violent service delivery protests in the provincial capital Mahikeng

It was reported that five of the province's worst performing municipalities have been dissolved by the cabinet. The interim provincial committee recently noted that there had not been a single stable municipality

Ramaphosa said a report on the state of the province was imminent.

“All these things we deal with on an ongoing basis. What we have insisted on is that, we want the divisions to come to an end. People must be united, work together and that is the message that national officials have to put to the leadership here and that all of us must join hands and run a very effective and winning election process. And that is exactly what we are going to do.”

Addressing a packed marquee later at the Tshepanang Day Care Centre, Ramaphosa told the community that, “I know you are tired of your municipalities in the North West, they are a mess. We want our municipalities to be turned around, they will be fixed, whether they like it or not. We will not have anyone working for the municipality if they are going to steal from the people.

“We want municipalities to work for the people.”

Ramaphosa also said the ANC was not intimidated by independent candidates. “If you are an ANC councillor or member and then stand in an election outside and against the ANC, you basically define yourself outside the ANC. The (ANC) constitution is quiet clear and in many ways, you have basically dismissed yourself from the ANC.

Addressing the legislature following his election, North West premier Bushy Maape promised he will not disappoint in his duties.
Politics
11 months ago

“You are telling the whole world that I am no longer ANC so then we take it that you are anti-ANC and we will campaign against you and we are not concerned about independents because the ANC brand is much stronger than an independent brand.

“So we go as the ANC to contest in the local elections. We are an organisation that has a history of good performance. Even where we have had challenges in some places, we have always sought to correct ourselves.”

He encouraged all ANC members to stand together and ensure that the party wins back most of the municipalities.

“Yes, we have always spoken about factionalism in the ANC. We are a political movement and there are people who will pursue different approaches to issues, different understandings to issues and in the end as they approach that, they create groupings.

“Everyone is rallying behind the victory of the ANC so whatever differences people have, or have had or will have in the future, are put aside and be united against one cause of getting a victory and in the cause of that we will be working together, we will be brushing shoulders against or with each other and we will be exchanging views and that in itself is going to unite us. So I am seeing a great unity of purpose and a great unity for the future.

“So I am using the election campaign as a unifying force and moment in the ANC and it is wonderful to see comrades who have held different positions working together, hugging each other and walking in the streets hand-in-hand and all those differences will hopefully just melt away.”

North West premier Job Mokgoro has finally given in to pressure and is resigning.
Politics
11 months ago

Embattled North West premier Job Mokgoro has refused to resign until he has met President Cyril Ramaphosa.
Politics
11 months ago

Defiant North West premier Job Mokgoro wants President Cyril Ramaphosa to explain the reasons for his dismissal before he hands in his resignation ...
News
11 months ago