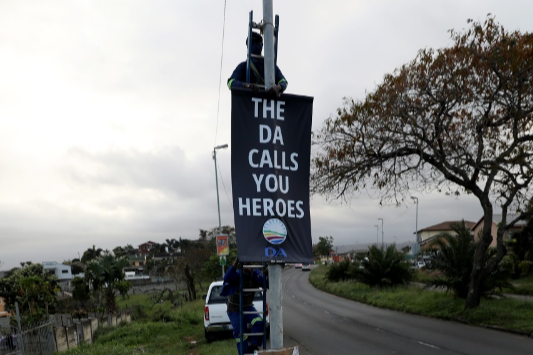 The DA did a turnabout on the election posters they put up in Phoenix, KZN.
Image: Sandile Ndlovu

This week on Sunday Times Politics Weekly with Mike Siluma, our learned panel considers the uncertain future of the DA in the wake of controversial election posters which have caused tensions within the party. Insiders suggest this may be a litmus test for party leader John Steenhuisen's future at the helm of the opposition party.

Also on our menu this week will be the pressure piling up on Eastern Cape premier Oscar Mabuyane after the public protector’s adverse report on him. The panel considers the effect these allegations could have on President Cyril Ramaphosa's future political career as divisions in the party continue to grow.

PODCAST | Behind the DA's poster own-goal & how strong is SA's judiciary?

In this week’s episode of Sunday Times Politics Weekly, we shed light on the controversy around the DA’s campaign posters in Phoenix
Politics
7 months ago

In this week’s episode of Sunday Times Politics Weekly, we discuss the main party election manifestos and take a closer look at the SIU's report on ...
Politics
7 months ago

PODCAST | Elections: besmirching the IEC’s good name and Cosatu continues to back the ANC

In this week’s episode of 'Sunday Times Politics Weekly', our panel tries to understand what’s going on in the alliance after Cosatu’s decision to ...
Politics
7 months ago