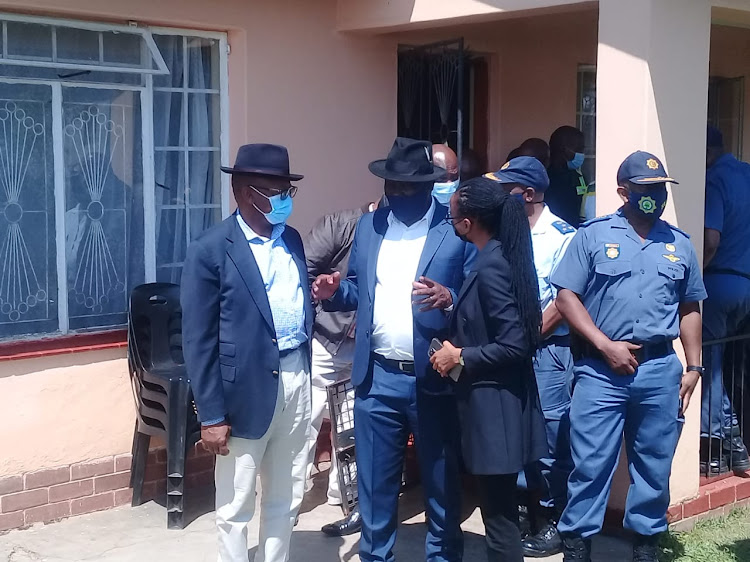 The family of the late EFF election candidate Thulani Shangase, who was gunned down in the Herwood area, outside Pietermaritzburg on Sunday, want to meet the two dominant political parties in the area before his funeral on Saturday.

This was the word from family spokesperson Sifiso Shangase after a visit by police minister Bheki Cele and his deputy Castle Mathale to their home on Tuesday.

Shangase was gunned down shortly after a meeting with party agents.

He was vying to dislodge the Msunduzi ward from the ruling ANC.

“We wish to have a meeting with either the minister or the representatives of the ANC and the EFF so we can be in a position to chart a way forward. We have to be proactive so we can reduce and stop anything that might be negative at the funeral,” he said.

He said family representatives would also form part of this meeting.

“As a family, we have taken it upon ourselves to say we want to lead this course because this is a family member who has passedon.

“We want to bury him with dignity and hence we don’t want to politicise his funeral,” said Shangase.

He said Shangase had never opened up to the family about death threats.

“In any given time we meet as a family, but he has never shared anything about his life being in danger. He would set out as an individual to campaign. That’s how free he was,” said Shangase.

He said his death had left a big void in the family.

“There is honestly no-one who would be able to fill that void. We just have to trust the Lord. We all know that every person has a particular role that they play in a family,” said Shangase.

Cele, who also visited the Dambula crime scene where Shangase was gunned down, said the case had been handed to the political task team.

“ We are going to look at all issues that led to this crime. We need a bit of space to investigate” he said.

Cele allayed fears of a surge of politically motivated killings as the November 1 elections loom, stressing that the police ministry had made all contingency plans to avoid this.

He said he had met with the Electoral Commission of SA (IEC) on Monday where they deliberated on the state of readiness for the local government elections.

“We have profiled all the voting stations based on their risk and we have identified 300 which are prone to give us problems.

“KZN features prominently along with other provinces such as Western Cape and Gauteng. I am giving you an assurance that not a single station will be without police personnel,” he said.

The chairperson of the SA National Taxi Association (Santaco) in uMgungundlovu region, Bheki Sokhela, led taxi bosses in paying respects to the family. He used the opportunity to distance the taxi industry from this incident.

“We say this because there has been a lot of consternation surrounding the murder. He [Shangase] was well–liked in the industry,” he said.

He paid a glowing tribute to Shangase, describing him as an integral player in the region’s taxi operations.

“Shangase was part and parcel of our industry. He was indispensable in the enforcement of safety for our commuters and drivers.

“On any given day he would be up as early as 5am to patrol the rank,” he said.

The distraught family of slain Economic Freedom Fighters candidate Thulani Shangase want the political killings task team to get to the bottom of his ...
Politics
3 months ago

The number of murdered politicians ahead of the November 1 local government elections continues to surge, leaving many distressed.
Politics
3 months ago

Suspected political-related killings have increased in the run-up to local government elections on November 1.
News
3 months ago