Judge admits that the matter between the party and the electoral commission “is not straightforward”. 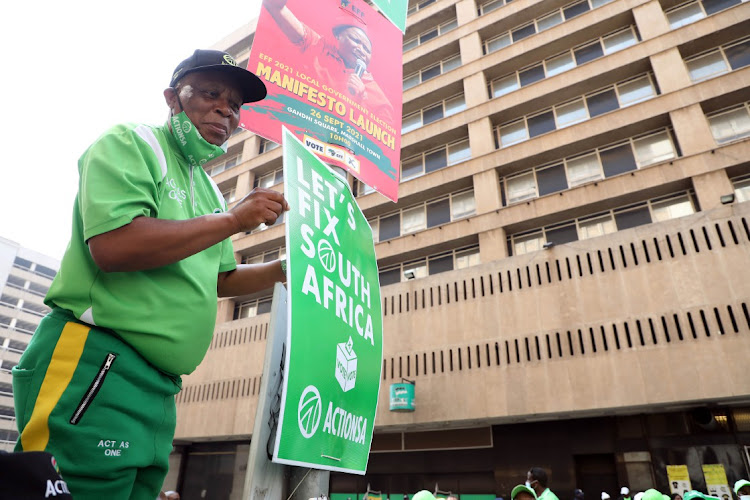 With just 10 days left before the local government elections, the IEC says it is impossible to amend ballot papers to include ActionSA’s name but the party, led by Herman Mashaba, pictured, is not backing down, saying the commission must ‘find a way’.
Image: ANTONIO MUCHAVE

With just 10 days to go until the local government elections, the IEC says it is impossible to amend ballot papers to include ActionSA’s name.

But the party is not backing down, saying the commission must “find a way”. It proposes that stamps or stickers of the party’s name be placed next to its logo if ballot papers cannot be reprinted given the remaining time.

When and how this is done, is the commission’s “baby”, ActionSA argued during a virtual electoral court hearing on Thursday.

The political newcomers took their fight to the court after the commission refused to amend draft ballot papers, which showed only the party’s logo and not its name. In its defence, the IEC put the blame squarely on ActionSA, which it said failed to put forward an abbreviation when it initially registered as a party.

However, advocate Adila Hassim told the court the party designed its eight-letter name to serve as its only identifier, as it did not want a separate abbreviation or acronym in all functions. She argued that regulations and application forms did not make an abbreviation compulsory, nor make it clear that the implication of this would result in a blank space during the drawing up of ballot papers.

And, therefore, she said, the request to correct this was just and equitable.

“The apparent unwillingness of the commission to remedy this issue is in conflict with its obligation to run free and fair elections.

“The stance adopted by the commission by insisting that ActionSA's request can’t be addressed because it did not select an abbreviation in circumstances that the registration form did not require it, is unreasonable and violates ActionSA’s section 19 rights,” she argued in slamming the IEC’s handling of the matter.

Hassim said the commission’s decision not to remedy the issue was unlawful, did not consider the merits of the request, and failed to explain “why an identifier that is presented as optional when you apply to register as a party, is later held to be mandatory”.

“The commission has failed to explain why it chooses not to alert parties at the point of registration of this consequence, yet it has temerity to say, 'ActionSA you made your choice, you must live with it',” said Hassim.

Advocate Michael Bishop, acting for the commission, however, accused the party of seeking preferential treatment as it was relatively new. He argued that the move not to amend the ballot was in line with the law.

“What is really at the heart of this case is that the applicant seeks preferential treatment ... The applicant says it should be treated differently because it is a new party and voters may not be aware of its logo because it’s a new party. But the commission cannot have different rules for old and new parties; it must have the same rules for all parties otherwise the elections will not be free and fair.

“Here, the same rule has been applied to all parties equally. The rule is, we will put your registered abbreviation name on the ballot and if you choose not to have it, that is your choice and we will respect it,” he said.

Bishop further argued there was nothing stopping the party from registering an abbreviation the same as its name if compliant with the eight-letter rule. He cited another relative newcomer, Good, which registered the same name and abbreviation.

“There is nothing unusual about what’s happened here, this is what the commission has been doing since 1994, it uses abbreviation on ballot papers, it relies on parties' registered identifiers through the formal process in the legislation. The issue has not come up before because parties knew if you don’t register an abbreviation, the commission can’t use an abbreviation.”

Judge Jeremiah Shongwe asked if the rules had been noted down and if political parties had been made aware of them.

“Was the importance of the abbreviation in the design of the ballot paper explained and that it would be applicable in the design and not the name because we know the name to be most important ... were the parties informed about this?” he asked.

Bishop would not provide a straightforward answer other than to say, “any reasonable political party would know that was the case ...”

When the same questioned was asked for the second time, Bishop said: “I can’t point to a specific document which set that out in black and white and was sent to all political parties.”

Judge Henry Mbha noted that it was not an easy case but the court would deliberate the matter and hand down judgment soon.

Political newcomers ActionSA are on Thursday in a virtual court appearance challenging the Electoral Commission of SA, demanding that Action SA's ...
Politics
8 months ago

ActionSA president Herman Mashaba says he condemns xenophobia but will work to deal with illegal immigrants should he again take over as mayor of ...
Politics
8 months ago

The Electoral Court has ordered the Electoral Commission to file its opposing papers by Tuesday after ActionSA’s bid to have its name added to the ...
Politics
8 months ago