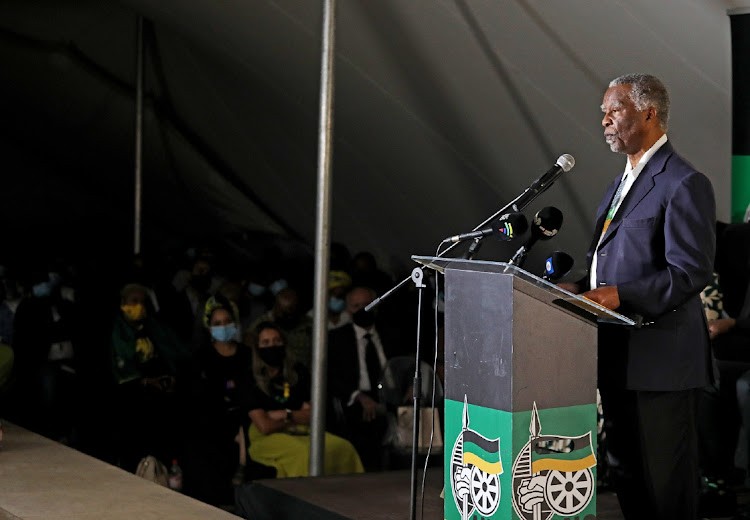 Former president Thabo Mbeki was sitting at home one day when he got a missed call from a Cape Town phone number. Upon returning the call, he realised he had reached the ANC’s Western Cape provincial office.

The person who picked up the phone at the office asked him who he was, to which he responded he was Thabo Mbeki. The person then shockingly proceeded to ask from which company he was calling him .

This is when Mbeki realised there was a problem in the ANC.

He relayed this story on Thursday evening in Johannesburg, as he engaged business people and professionals on the ANC's election manifesto.

He was driving home a point he had made earlier about how the quality of the ANC membership had deteriorated over the years, and why the renewal of the party was critical.

“The last conference of the ANC in 2017 said there must be renewal of the ANC. You can’t have a membership like this ... The population is losing trust in the organisation. The programmes of the movement that are being announced are not implemented. The ANC is being identified with corruption, all as a consequence of this negative tendency in terms quality of membership of the ANC. [The] conference said, therefore, there must be renewal of the organisation so that the ANC becomes what it ought to be.”

The party’s membership has “degenerated” so much that in these elections the ANC has, according to Mbeki, correctly involved the communities in the choosing of the councillor candidates.

People were now becoming members of the ANC for the wrong reasons, particularly wanting to advance their personal interests and for self-enrichment.

It was, therefore, not possible to entrust this degenerated membership with the important task of choosing councillors.

“How do you entrust an organisation like that, which is not renewed, with the task of producing the candidates that we want? You can’t. An ordinary and properly functioning branch of the ANC would not need to take special measures to understand the community in this ward.

"If you are an active member of the ANC properly, you would know what kind of candidate would be welcomed to this community. But because we don’t have branches of that kind, we had to get into these measures," he said.

He said that the renewal process of the ANC was necessary, but it was going to be painful as a lot of people would be heavily affected.

The renewal process would, among others, leave people by the wayside, especially those who were not of the calibre the party wanted, Mbeki said.

“It's going to be a very painful process because there are people who are very good at toyi-toying [protesting] and singing ANC songs - "viva" 20 thousand times - but are not ANC,” he said to applause.

“And the problem with that is that it's not just the ANC problem, it becomes a national problem because the ANC with its weight and size, this is a governing party and if it misbehaves it has a very negative impact on the country,” he said.

Former deputy president Dr Phumzile Mlambo-Ngcuka has called on those elected in the upcoming local government elections to lead with humility.
Politics
6 months ago

Ramaphosa full of promises, but is confronted by protesters during his Western Cape campaign
Politics
6 months ago

'I’m sure things will be right over time,' says David Mabuza as he woos Mpumalanga voters

Deputy president David Mabuza says campaigning has been difficult this year, with concerns over unemployment and poverty having grown in the wake of ...
Politics
6 months ago