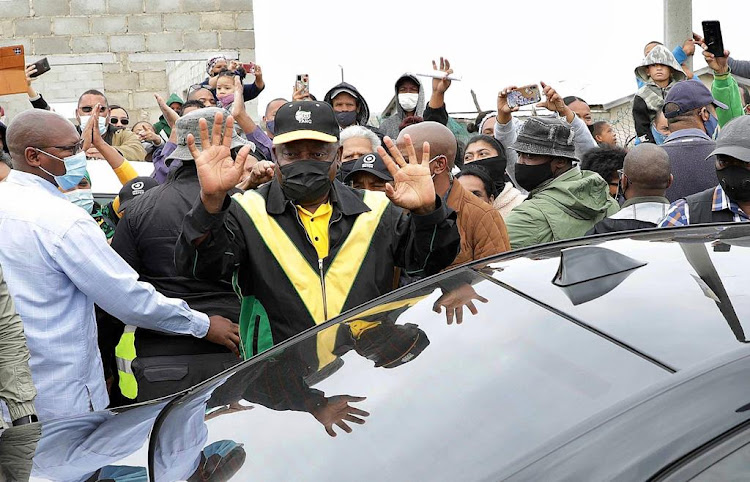 Protesters labelled the ANC's online-only school application policy as 'anti-black' during a protest against ANC president Cyril Ramaphosa, who was on the election trail in the Cape Flats on Thursday.
Image: Esa Alexander

Members of lobby group Equal Education on Thursday infiltrated an ANC election rally in Khayelitsha on the Cape Flats, where party president Cyril Ramaphosa was on the campaign trail.

A group of Equal Education members attempted to stage a protest at an informal settlement in Khayelitsha, brandishing anti-ANC placards.

Before addressing a crowd of ANC supporters, Ramaphosa demanded that the Equal Education posters be put down.

“Put down those placards, all of them, including those brown ones. I have read them. Or are these people even sober? They look a lot drunk,” said Ramaphosa in Xhosa.

President Cyril Ramaphosa promised a resident a house on Thursday - to be built in three weeks.
Politics
1 month ago

WATCH | Did the ANC ‘lie’ about one million houses in Alexandra? Mbalula says no

ANC head of elections Fikile Mbalula has responded to criticisms he received after an interview in which he denied that President Cyril Ramaphosa ...
Politics
1 month ago

"Fact, you can't rescue both President Ramaphosa and the ANC at the same time, one has to go. You choose," said Duduzile Zuma-Sambudla.
Politics
1 month ago

An ANC campaign rally in Ga-Rankuwa, Tshwane, temporarily descended into chaos on Friday when angry residents demanded their grievances be addressed.
Politics
1 month ago