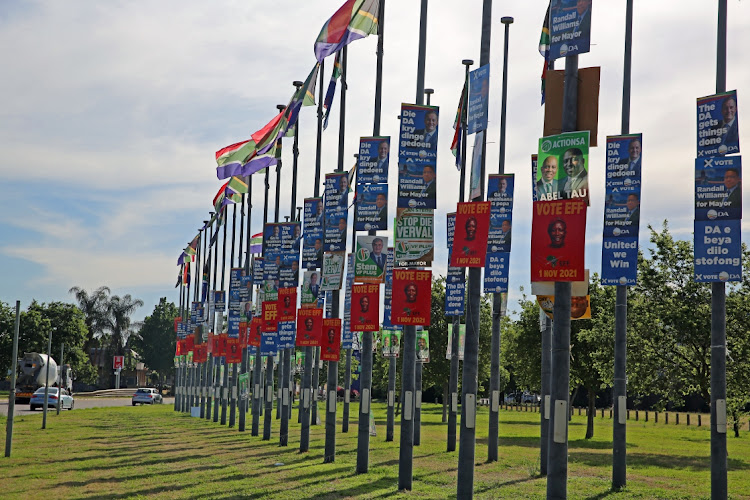 Many of the political parties crowding the scene ahead of the November 1elections are going to end up in coalitions. Voters have to hold them to the promises they will make to bargain their way to power.
Image: Thapelo Morebudi

Malema calls for a multiparty pact for improved service delivery

EFF leader Julius Malema has called for political parties to put aside their ideological differences and prioritise the delivery of basic services.

According to him, the EFF is ready to sign a pact with its political enemies the ANC and DA if it means delivering clean running water for communities in need.

Malema calls for a multiparty pact for improved service delivery

If ANC councillors seek to enrich themselves ‘we will open the door for them’: Ramaphosa

“A lot of you don’t like it when I say ‘fellow South Africans’ because you are afraid that I am going to ban alcohol.”

This is how ANC president Cyril Ramaphosa greeted a throng of the ruling party’s supporters on Friday who had gathered at the Harry Gwala multipurpose centre in Zamdela, Sasolburg.

Ramaphosa started his local government elections campaign in the area by apologising: “I am so sorry I am late. There was another government engagement. Please forgive me."

If ANC councillors seek to enrich themselves ‘we will open the door for them’: Ramaphosa

With days to go until the local government elections, and the DA is optimistic it will emerge victorious in Cape Town.

Mayoral candidate Geordin Hill-Lewis was in Mitchells Plain, Khayelitsha and Langa township on Thursday where he promised residents service delivery and an end to load-shedding.

Speaking to TimesLIVE, Hill-Lewis said he is ready to bring change to the City of Cape Town should he be elected as its new mayor during the local government elections on November 1.

The DA has again fired a broadside against its former mayor, Herman Mashaba, and his party ActionSA amid a heated campaign to win the City of Johannesburg in next week’s local government elections.

At a press conference held at the party’s head office in Johannesburg, three DA leaders took turns slamming Mashaba, saying a vote for him amounted to a vote for the EFF due to his cosy relationship with the party during his stint as a DA mayor.

DA deputy chairperson of the federal council, Thomas Walters, read out a letter that shows how Mashaba allegedly lobbied the party to give power to the EFF in Metsimaholo municipality in exchange for its support in Johannesburg.

There’s been some magnificently dim-witted and confusing campaigning ahead of next week’s election, perhaps best exemplified by Thursday’s tweet from the ANC, claiming that “the mood at Phola Park in Ekurhuleni is electrifying ahead of President Ramaphosa’s address”; a triumphantly moronic choice of words in the very same week that the ANC and Ramaphosa literally failed to electrify the country.

The ANC, however, hasn’t had a monopoly on absurdity.

Consider, for example, king-for-hire Buyelekhaya Dalindyebo telling EFF supporters that Julius Malema has promised to buy him a luxury car.

PATRICK BULGER | Welcome to SA, where elections issues aren’t about race, yet somehow still are

Why has an election that should be all about the state of our metros and towns degenerated into a racial slanging match, with the DA cast as a party that promotes white interests, and the ANC presenting itself as having the welfare of the black majority at heart, even though that is clearly not always the case? One might have thought the well-publicised ruin of municipalities by ANC councillors, and the corruption scandals, would have made this an easy election for the opposition. But this has not been the case, possibly because there has never been an election in SA that has not been about race.

Conversely, though, if our politics were only about race, why has the EFF, with its overt promise of a full-scale racial reversal of roles, not managed to break through its 15% ceiling? Its leader, Julius Malema, has not been shy to capitalise on racial tensions, and much of his political narrative is based on the idea that 1994 represented anything but a break from the past. White privilege remains intact, even with an ANC government in power. It’s a persuasive narrative, another chapter in the epic saga of dispossession.

Could it be, though, that while race infuses our politics, and probably always will, it is not the only consideration in people’s legitimate aspirations for their and their children’s future? This suggests an underlying racial pragmatism, and a possible foundation upon which to build a fairer society.

PATRICK BULGER | Welcome to SA, where elections issues aren’t about race, yet somehow still are

MAKHUDU SEFARA | Electoral dysfunction: with these three pretenders, SA is a collapsing man

There is a video of an apparently inebriated man who, just before casting his vote, desperately tries to keep his balance, but collapses on the makeshift cardboard voting booth. The creator of the short social-media offering has inserted into the video the words: “Me next week Monday”, with a couple of laughter emojis.

It was a spectacular collapse.

The weight of things to consider, for many of us, is enough to see us fall, hopefully not on the Independent Electoral Commission’s (IEC) cardboard on Monday. Depending on the rubrics we’ve created to help us decide who to vote for, the collapsing man might be a metaphor for our troubled democracy and the paucity of choices available for the electorate.

MAKHUDU SEFARA | Electoral dysfunction: with these three pretenders, SA is a collapsing man

They’re Bromming with hope for better services. Pity about their candidates

As Monday’s election looms large, the outlook for the residents of Bromhof, a middle-class suburb in Johannesburg’s Randburg municipal area, remains bleak.

While some of the city’s suburbs are blessed with municipal councillors who are communicative and active, Bromhof seems somewhat lacking in this regard.

The best-known features in the area are Rhema Church; the old White Horse Inn, which now functions as an Akeso Clinic for mental health patients; a karate dojo; a laser-tag spot; and your usual shops, amenities and restaurants associated with suburban life.

They’re Bromming with hope for better services. Pity about their candidates

The DA’s Geordin Hill-Lewis, mayoral candidate for Cape Town, “absolutely” wants every Capetonian to feel cared for and respected as a resident, no matter where they live.

He is a front-runner for the mayoral chain after next month’s local government elections. The DA already governs Cape Town with a 67% vote from the 2016 polls.

‘We want Cape Town to be GOOD for everyone’

That was a huge success as the DA won the city with a whopping 67% of the vote and De Lille became the first Cape Town mayor to win a second term since 2000.

Just over five years later, Herron is now the mayoral candidate, albeit for a different political party. He and De Lille quit the DA in 2018 and formed GOOD.

‘We want Cape Town to be GOOD for everyone’

In a wide-ranging discussion on Eusebius on TimesLIVE, ActionSA’s mayoral candidate for Johannesburg, Herman Mashaba, engaged host Eusebius McKaiser on his vision for the city.

Pearl Thusi: 'If the ANC wins elections again then we just have a deep-rooted self-hate as a nation'

As Mzansi gears up for the local government elections on Monday, actress Pearl Thusi has weighed in on the ruling party and what a win for the ANC could mean for the country.

Millions are expected to vote for their local ward councillors and public representatives. There are 278 municipalities, comprising eight metros, 44 districts and 226 local municipalities.

Taking to social media, Pearl said if the ANC were to win the elections it would say a lot about the state of the country at the moment.

That arrogant volunteer is right - the ANC will most likely win all these elections - HOWEVER - we need to reduce the arrogance by reducing their margins of victory election by election. So they stop being so comfortable and maybe their arrogance will reduce.

Pearl Thusi: 'If the ANC wins elections again then we just have a deep-rooted self-hate as a nation'

PODCAST | Pre-election analysis: the number of loyalist voters is on the decline

This week on Sunday Times Politics Weekly, our panel delves into some pre-election analysis. Ahead of the polls, we will look at which major cities are likely to fall to coalition governments, and how those coalitions are likely to be structured.

After that, we will be looking at the sea change in the ANC, which has seen the return to the political forefront of key leaders, including ex-president Thabo Mbeki. What lies behind this development, and what does it mean for the ANC?

PODCAST | Pre-election analysis: the number of loyalist voters is on the decline
Pearl Thusi: 'If the ANC wins elections again then we just have a deep-rooted self-hate as a nation'