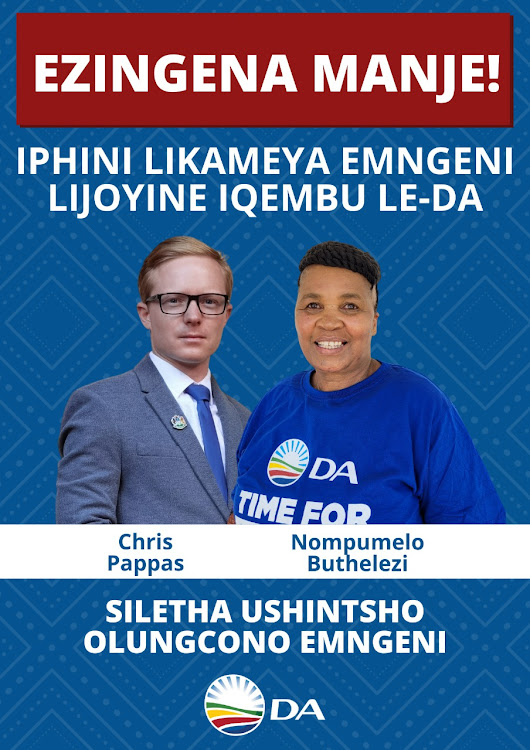 Former ANC deputy mayor in KwaZulu-Natal, Nompumelelo Buthelezi, has joined the DA after resigning from the municipality and leaving the party due to death threats. DA mayoral candidate in uMngeni, Chris Pappas said the party was pleased to welcome her.
Image: Supplied

A former ANC deputy mayor in KwaZulu-Natal has joined the DA after resigning from the uMngeni municipality and the ANC due to death threats.

Nompumelelo Buthelezi left the municipality and the ANC just days before the local government elections.

“The DA in uMngeni is pleased to welcome mam Nompumelelo Buthelezi to our team.

“Nompumelelo entered local politics to change the lives of her community. However, as she stated, she was part of an organisation that failed to deliver,” said Pappas.

Buthelezi had been a member of the ANC for over 12 years, Pappas said, and she has now chosen the DA as her new political home because she has seen how the party can deliver and improve people's lives in local government.

He added that the DA's  manifesto and vision not only inspired Buthelezi but many others during the local government election campaign.

“This move goes a long way to show people that it is OK to change your vote and that you do not have to be in an abusive relationship with one party forever. By changing your vote you can change your future,” he said.

Pappas called on the people of uMngeni to “please lend the DA their vote for five years. We are ready to get things done.”

Meanwhile the DA is looking to make history in KwaZulu-Natal by clinching a victory that will see it govern a municipality in the province for the first time.

The party has set its sights on uMngeni municipality, where fewer than 2,500 votes is the difference between the DA and the governing ANC, the only two parties represented in the municipal council.

Electricity supply became the key issue as election campaigns wrapped up, with the ANC concerned that this week's load-shedding will cost it outright ...
News
9 months ago

DA federal council chairperson Helen Zille has expressed concern about the IEC's handling of the local government elections, saying the party is ...
Politics
9 months ago

“This is not an election gimmick. It's a serious wake-up call for all those voters who believe ActionSA will not turn around after November 1 and ...
Politics
9 months ago