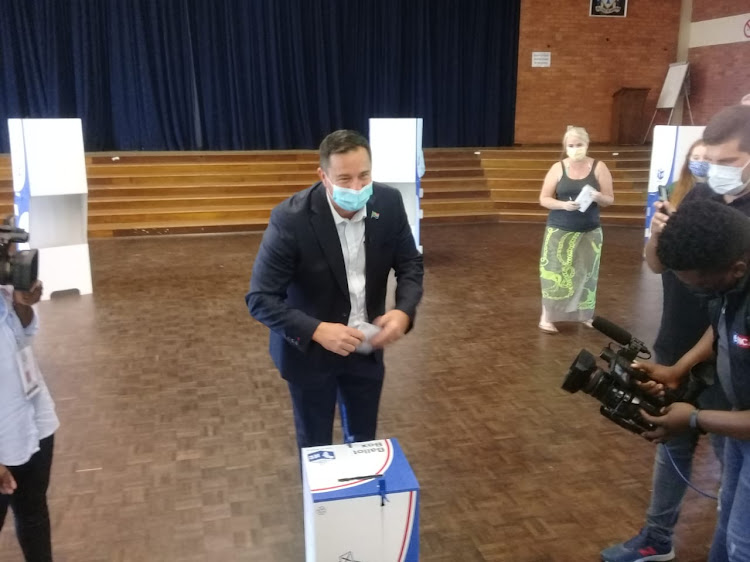 DA federal leader John Steenhuisen says the eThekwini municipality could do with a “good dose of DA government to clean up after the ANC municipality”.

Steenhuisen was speaking after he cast his vote at his alma mater, Northwood Boys High School in Durban north, where he urged South Africans to go out and cast their votes in the local government polls.

“I think we had a good campaign in eThekwini and our message that we get things done resonated.  A lot of municipalities in this province are in deep trouble, like they are around the country. I think people are looking for some hope and change.

“They want service delivery — ways to keep the lights on, water in the taps and keep communities safe. They want a government on their side and not spending money on politicians.”

The former DA caucus leader of eThekwini municipality said it had been misruled in the last 20 years, including by former ANC mayor Zandile Gumede who was allegedly involved in a number of “shenanigans”.

He said this was a far cry from how things were when then mayor Obed Mlaba worked alongside city manager Mike Sutcliffe.

“It saddens me that eThekwini has lost its shine. We have the best weather and people in eThekwini and the best ingredients for a great city,” said Steenhuisen.

He said the party was hoping to win the uMngeni municipality.

“We are just two seats from winning.”

He said the party would not concern itself with coalition talks at this stage.

“Our focus has been on getting more DA votes in the ballot boxes. We will worry about that after November 2.”

He said the DA had learnt hard lessons in coalition partnerships in the past.

He said once coalition negotiations begin, they will be on the look out for parties that share the same values as the DA.

Provincial leader Francois Rodgers, who cast his vote in Kokstad, said he was pleased by reports of good voter turnout.

Like Steenhuisen, Rodgers believed the DA would clinch uMngeni. He said the party had also been emboldened by the recent sudden resignation of uMngeni deputy mayor Nompumelelo Buthelezi.

He predicted ANC electoral support would dip below 50% in eThekwini.

“We have worked hard,” said Macpherson.

A former ANC deputy mayor in KwaZulu-Natal has joined the DA after resigning from the uMngeni municipality and the ANC due to death threats.
Politics
8 months ago

DA federal council chairperson Helen Zille has expressed concern about the IEC's handling of the local government elections, saying the party is ...
Politics
8 months ago