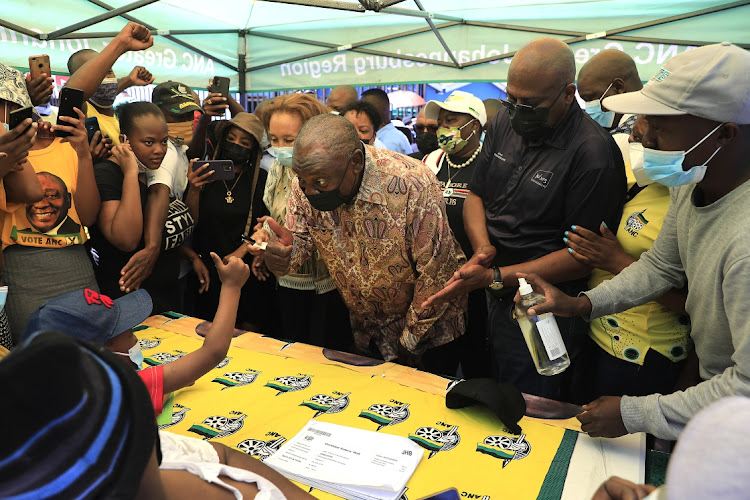 President Cyril Ramaphosa on Monday said aggrieved South Africans who feel let down by the government have every right to complain.

“The provision of services in municipalities is really difficult and complex and our people have reason to complain and they also have reason to raise issues.

Ramaphosa was speaking shortly after he cast his vote at Hitekani Primary School in Chiawelo, Soweto. His comments come as various communities in Soweto and countrywide, took to the streets protesting about a lack of service delivery, particularly electricity.

On the way to the voting station, located not too far from Ramaphosa’s family home, TimeLIVE saw what remained of a service delivery protest, with roads blocked with rocks, black tyre marks and traffic lights that were not working.

He said, “We have been saying that we know what the problems are ... we have said this time around we want to correct what has not been going well.”

Ramaphosa said newly elected Johannesburg mayor Mpho Moerane has been carrying a book detailing what needs to be done in several areas around Gauteng.

“These are the needs, budget, complaints, challenges of our people and he has always said, ‘Mr President, this is what we are going to do, this is how we are going to do it and this is how much it is going to cost.’ This, for me, is the way our local representatives should be doing their work. Understanding the problems and challenges of our people ... to know what needs to be done and how much it will cost.”

Ramaphosa pledged that the country was entering a different era of municipal service delivery.

“I would like to suggest that municipal services are going to be very different from now on. But I have also been saying that wherever it has been difficult and where we cannot deliver properly, the least we can do is to go and explain to our people and tell them why we have not been able to do it at the time and what our plan is.”

Ramaphosa said he has found that when this is done, “people have a level of understanding and also forgiveness. In the past we have not always done that and we are the first to admit it.”

He urged all South Africans to vote as “they will be ushering us into a new era, be it electricity, water, sewage, sanitation, houses, they want to see us make an effort and this time around, I would like to see all municipalities make an effort.”

Electricity supply became the key issue as election campaigns wrapped up, with the ANC concerned that this week's load-shedding will cost it outright ...
News
2 months ago

Ramaphosa said he was delighted that voting day had finally come.

“My wife [Tshepo Motsepe] and I have just voted and we are really delighted. I am delighted that this is finally the culmination of our election campaign. It’s been a few weeks of real hard work, but I am glad to see that many South Africans are seemingly very excited to exercise their democratic right this morning.”

On his usual morning walk at about 6.30am on Monday, Ramaphosa said he saw a number of people, who told him that they were on their way to vote. “So there is a great deal of enthusiasm.”

The country should be proud of itself, said Ramaphosa.

Ramaphosa said this had been a very enriching process. “We have been interfacing and interacting with the our people, getting to know their aspirations, their hopes and disappointments and engaging with them without any form of fear.”

He said he had gone out “with great humility to meet them and listen to them, and as we have said, this is the one election where we are clearly saying to our people that we are going to do better.

“We have realised that we have not always realised the aspirations of our people but we are going to do better.”

He was optimistic about his party’s chances.

“We are looking forward as the ANC to a victory, an overwhelming victory here in Johannesburg, municipalities in Gauteng and elsewhere in the country.”

Ramaphosa nonetheless wished all the parties, “all of them without exception, the best of luck, as our people respond to what we have been saying to them. Today is a great day, a nice sunny day here in Gauteng and providence is with us again.”

The water crisis in Tshwane and electricity issues in Johannesburg and Ekurhuleni will become determining factors today when Gautengresidents head to ...
Politics
2 months ago

Many residents in Bochabela, Rocklands, Kagisanong and Phahameng in the Free State were going about their business on Monday far from voting stations.
Politics
2 months ago

EUSEBIUS MCKAISER | Why I voted and how I decided my vote

Disappointment in the options on the ballot paper is an apt response to the state of the political race.
Opinion & Analysis
2 months ago

WATCH: Scuffle at Mamelodi voting station as people demand to be added to voters' list

Thabo Lekalala, who is casting his vote at Mamelodi East Ward 93, said he was worried by the violence outside the voting station on Monday morning.
News
2 months ago