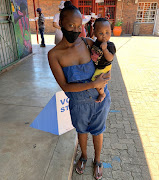 Image: Graeme Hosken 'When I was a child we could play safely in the park with friends. Now it is too dangerous,' said Charnie Jones.

“It is a nightmare for our children. When I was a child we could play safely in the park with friends. Now it is too dangerous.

“I voted so my children have a chance,” said Charnie Jones, a resident of  Eersterust in Pretoria on Monday.

Walking out of her voting station at PS Fourie Primary School, Jones said she was tired of  poor services.

“If you want your children to have a chance to be able to access decent books, which are not broken or of poor quality, we must go to Silverton.  There, at least, is a decent library.

“All the parks here are overgrown and used by druggies and criminals.

“Our children have no chance of a future living here.”

She said crime was through the roof.

“We don’t need a John Wick. What we need is a proper metro police service,” she said in reference to the nickname used to describe one or more people reportedly behind the murder of several notorious gangsters in neighbouring Mamelodi.

She said she had voted for an improvement in service delivery.

“For once we just want decent services and to make sure the council remembers that we actually exist and deserve services as well.

“We want nice parks and decent facilities for our children to be able to play safely and have access to proper extramural activities.”

Having cast her vote in the township east of Pretoria, she said she had voted so she and her family could be safe in her home and on the streets.

“This guy John Wick who is killing the gangsters in our area is a bad man but not as bad as the gangs here.”

For months criminal gangs fighting for control of the township have been terrorising residents.

“This person called John Wick has come and is killing these gangsters, but it is the police who should be killing them. It is not just anyone who should do that. What happens if he kills the wrong person? Crime makes me sad. I voted so that we have better police in Pretoria because the police we have now are not doing a good job.

“They are not catching the criminals. It is the criminals who are winning which is wrong. I really hope my vote makes a difference," she said.