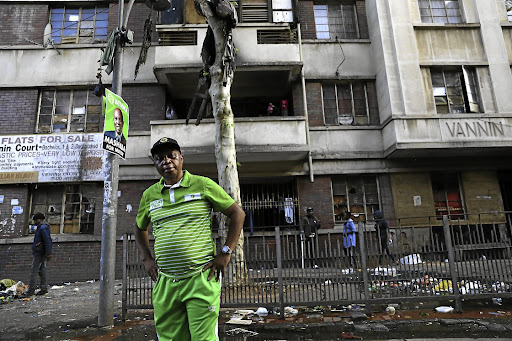 Herman Mashaba in front of a building hijacked more than a decade ago by illegal tenants in the Johannesburg inner city.
Image: Alon Skuy

Listen to his views:

ActionSA boasts fourth spot in Gauteng, following the ANC, DA and EFF respectively. The party has earned 6% of the area's votes thus far. While it is still early in the counting process, Mashaba said his party has done well despite hurdles out of their control.

He highlighted his distaste with the way the Electoral Commission has handled Monday’s local government elections, saying the party has had four run unpleasant run-ins with the commission.

It’s never been as important to be in the know as it is now. Subscribe to Sunday Times today and get 50% off. Click below to subscribe.

UPDATE | Elections 2021: Significant swings overnight as the battle for SA’s metros draws to a close

As of Thursday morning, five of the country's eight metros will not have an outright winner, paving the way for vital coalition talks.
Politics
6 months ago

“This is not an election gimmick. It's a serious wake-up call for all those voters who believe ActionSA will not turn around after November 1 and ...
Politics
6 months ago

Initial results from Monday’s municipal polls suggest the ANC will garner 46.6% of the vote, the Council for Scientific and Industrial Research said.
Politics
6 months ago

In a wide-ranging discussion on 'Eusebius on TimesLIVE', ActionSA's mayoral candidate for Johannesburg, Herman Mashaba, engaged Eusebius McKaiser on ...
Politics
6 months ago