‘Keep my name out of it’: Maimane tells Steenhuisen to stop blaming him for DA’s election performance 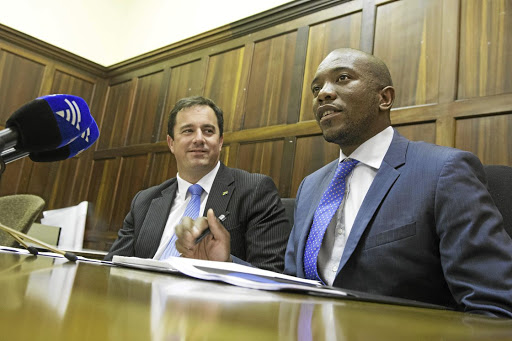 Former DA leader Mmusi Maimane has slammed his successor John Steenhuisen, saying he should stop blaming him for the party’s drop in performance in the local government elections.

The One SA Movement leader this week came out guns blazing after Steenhuisen blamed his 2019 exit for the DA’s performance in this year’s elections.

According to a Mail & Guardian report, Steenhuisen told journalists at the Electoral Commission (IEC) results operations centre that part of the reason the party lost support was that it “came out of that election [the 2019 general election] with a leader having walked off the job”.

Steenhuisen said very few parties in the world survive that.

Responding to the claims on social media, Maimane said the results were on Steenhuisen.

“Keep my name out of it. You made your bed, these results are on you,” said Maimane. “I am going to see you all in 2024. The future is independent.”

Keep my name out of it @jsteenhuisen. You made your bed, these results are on you.

Maimane said he delivered growth in 2016 and was not to blame for this year’s results.

“In 2016 I delivered growth, that’s the bottom line. Numbers don’t lie, check the scoreboard,” he said.

This is not the first time Maimane has lashed at Steenhuisen for his criticism of the DA under his leadership.

Last year, he took a swipe at Steenhuisen and labelled him a “Judas” after comments he made about Maimane’s leadership in KwaZulu-Natal.

“The previous administration was dismal. All opposition parties were critical of the ANC under [Jacob] Zuma. A key element of being leader of the opposition is to show the deficiencies in the ruling party. Judas Steenhuisen was in full agreement with our approach,” Maimane said at the time.

“Someone should tell Judas Steenhuisen to keep my name out of his mouth. It won’t end well for him. Just focus on your work and I will focus on my work. He must ask [Ghaleb] Cachalia.”

'Judas, keep my name out of your mouth,' Mmusi Maimane tells John Steenhuisen

Former DA leader, Mmusi Maimane has for the first time taken a swipe at his former long time ally and successor, John Steenhuisen.
Politics
1 year ago

It was not a 'cock-up', says Maimane of review panel that led to him leaving DA

Former DA leader Mmusi Maimane has insisted that the establishment of a party review panel that later made recommendations that resulted in his ...
Politics
1 year ago

One SA Movement leader Mmusi Maimane's face was spotted on some DA campaign posters that were bought by the Cape Muslim Congress in the Western Cape.
Politics
1 month ago