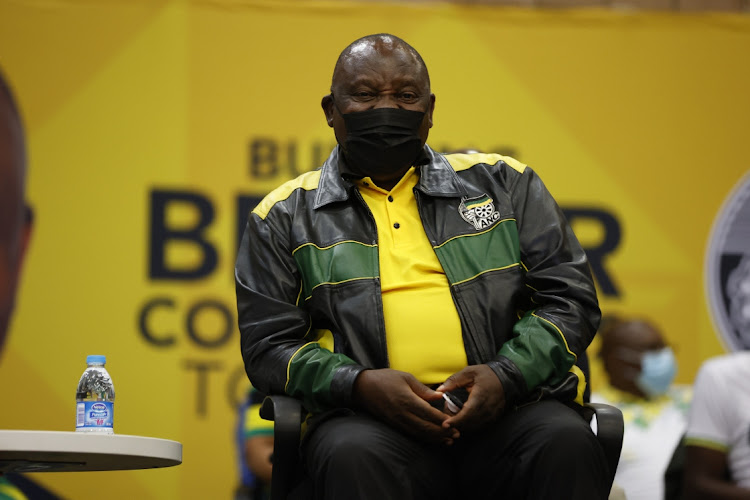 ANC president Cyril Ramaphosa during the party's 'thank you' event at the University of Johannesburg's Soweto Campus on Monday.
Image: Thulani Mbele

ANC president Cyril Ramaphosa has lambasted opposition parties for publicly “boasting” that they will not enter into coalition government with the ruling party, saying they were not keen on getting into bed with them either.

This after the 2021 municipal elections last week left 61 municipalities hung across SA, where there was no outright winner. In the wake of this, opposition parties, including the DA, ActionSA and the IFP, have come out to say they would never work with the ANC.

“A number of parties are going around boastfully saying they will not work with the ANC. But who said we want to work with them? We are not on our knees. If, comrades, we have to be in opposition benches, then we will be in opposition,” said Ramaphosa as crowds cheered loudly in support.

He was addressing supporters and party structures at the party’s “thank you” event in Soweto. He thanked them for exercising their democratic right and casting their votes — for whichever party, in the local polls.

Ramaphosa defended the party’s poor performance, which has seen its national support drop below 50% for the first time since the advent of democracy. But he nonetheless urged leaders and volunteers to keep their heads up.

“This was probably the most difficult election campaign that we have ever undertaken. It is at the end the worst electoral outcome for the ANC in 27 years of democracy. But it was a difficult campaign. That we must admit.”

“In the end, comrades, I don’t want anyone of us going around with their heads hung down, feeling like we are defeated. No ways. We are the largest party in every metro except Cape Town and Nelson Mandela Bay,” he said.

Ramaphosa said the ANC  was open to coalitions and would approach them with an open mind. He admitted that over the years, coalition governments led to dysfunctional municipalities but said the ruling party would change its approach this time around.

“We will not go cap in hand to anybody. At the same time, we will have an open mind.

“We don’t want casual agreements. When you enter into coalition, it’s almost as if you entering into marriage. We want to have stable and credible coalitions. We will enter those discussions with a clear intention of implementing the will of the people,” he said.

Turning to low voter turnout, the president said this was a concern which the ANC sought to take responsibility for.

“It’s not just bad for us as [the] ANC, but is it bad for our democracy. It's something that we must do something about. We must be able to get the majority of our people out to go and vote.”

The event comes after a meeting of the party's national executive committee (NEC) at the weekend. Ramaphosa did not go into details of what had been discussed other than the election outcomes.

“The NEC felt that the ANC as a whole should undertake an extensive and detailed assessment of these results and the factors that were critical in determining the outcome that we have. While there are many factors that would lead to this outcome, we are the first to acknowledge that the most critical factors are those that have to do with the state of our organisation as well as our performance in government.”

Despite the declining electoral support, Ramaphosa maintained that the ANC “is not about to collapse”.

“It has suffered a setback and we are going to work hard to fix that,” he said.

DA woos ActionSA, ACDP and Freedom Front Plus as coalition partners but is ‘not desperate’

The DA says it has reached out to several smaller political parties – including ActionSA, the ACDP and Freedom Front Plus – with draft coalition ...
Politics
1 month ago