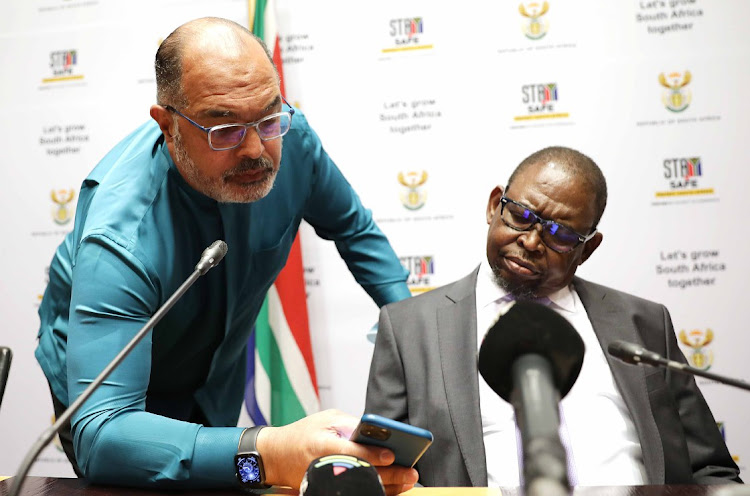 The SARS Commissioner, Edward Kieswetter and the finance minister, Enoch Godongwana during their press conference ahead of his first medium term budget speech at parliament, Cape Town .
Image: Esa Alexander

Commodities boom boosts tax revenue but it could be short-lived

A commodities boom has seen government collecting R120bn more in tax revenue than previously projected, helping to push economic growth to 5.1% in 2021, up from a 6.4% contraction in 2020.

Despite the surprising rebound, the economy remains at risk as a result of load-shedding, rising public sector debt and the slow pace of implementing economic reforms. These are key contributing factors to growth shrinking to a projected 1.8% in 2022/23 and 1.6% in 2023/24.

In a review of the medium-term budget policy statement (MTBPS), the National Treasury is warning that while the global demand for commodities has enabled mining to contribute massively to the revenue kitty, the additional money “flatters to deceive” because revenue collection still remains under pressure.

Commodities boom boosts tax revenue but it could be short-lived

Finance minister Enoch Godongwana has opted to “practise tough love” regarding  struggling state-owned enterprises (SOEs), saying their performance will have to drastically improve before receiving any further bailouts from government.

In his first Medium-Term Budget Policy Statement (MTBPS) presented in parliament on Thursday, Godongwana said he would, in the next three years, avoid further bailouts of SOEs, as they have been identified as a huge risk to the sustainability of the public purse.

A few hours before delivering his speech in parliament, Godongwana told journalists at a press conference that government was losing patience with SOEs that kept knocking at its door with cap in hand, while their performance has remained lacklustre over several years.

The National Treasury has backed efforts to deregulate the energy sector by allowing private players to enter the market and sell electricity directly to consumers.

This as it described continuous power cuts implemented by Eskom as a drag on growth.

“There is profound uncertainty about the durability of the economic recovery, mainly due to renewed volatility in global conditions and the risk of renewed Eskom power cuts,” the Treasury said in a review of the medium term budget.

Finance minister Enoch Godongwana has not budgeted for an extension of the R350 social relief of distress grant beyond the March 2022 expiry date, saying that decision resides with the cabinet.

“In terms of the basic income grant or R350 or anything, our view is that it comes to an end, it was extended until the end of March. Between now and end of March, government has got to decide what they do and not Treasury.

The government’s decision to offer a R1,000 one-off gratuity to civil servants as a sweetener for them to accept a 1.5% wage increase will cost R20.5bn in the current financial year.

This is money that was not catered for when former finance minister Tito Mboweni tabled the 2020/2021 budget in February.

This means that current finance minister Enoch Godongwana would have to ensure that government departments reprioritise and shift funds around to finance the payment of the gratuity.

[Happening NOW]: The Black Sash together with Solomon Tshuku Advice Centre, Ubuntu Rural Women & Youth Movement & Girls Potential Unlimited outside Parliament picketing ahead of the #MTBPS2021 as part of our call for permanent Basic Income Support for those aged #18to59years! pic.twitter.com/mi3Y5rO6Vu

Chairperson of the Standing Committee on Appropriations Cde Sfiso Buthelezi on expectations from the Finance Minister ahead of the #MTBPS2021. 1/2 pic.twitter.com/wYUwDorcIB