Disgruntled ANC staff to resume picket over salaries on Monday 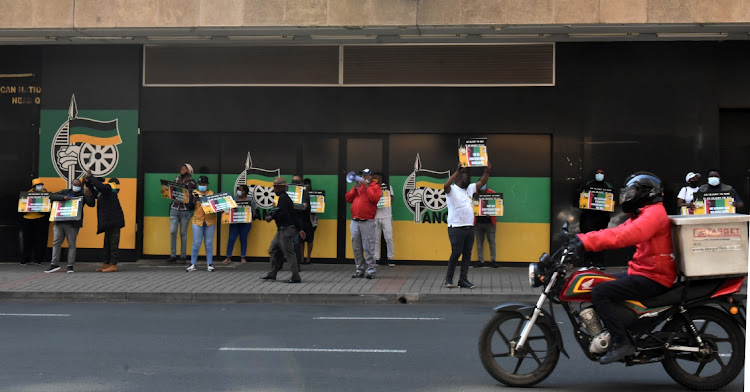 ANC staff picketing outside Luthuli House in Johannesburg in September. They will resume the picket from Monday.
Image: Freddy Mavunda

ANC staff will be bearing placards again when their suspended picket over salaries resumes on Monday.

I will be joining my comrades! pic.twitter.com/9RhIsy4nKS

Staff are protesting against late payment of salaries and the party’s alleged failure to pay medical aid and provident fund contributions.

The strike was suspended in September for staff to focus on winning the local government elections.

At the time Mdala said the decision to suspend the strike was taken “to work for a decisive victory” for the ANC in the local government elections on November 1.

“The staff and management remain committed to constructive engagement towards the resolution of their grievances.”

TimesLIVE reported in August that the ANC has been battling with cash flow for months and has an unsettled R80m Sars tax bill. The party deducted pay-as-you-earn tax from staff salaries but did not pay the money over to Sars.

The party has also reportedly failed to pay provident and pension funds for more than two years. In their demand letter, staff said they wanted all pension and provident fund contributions to be paid immediately, as well as outstanding salaries for July and August.

“We are unfortunately forced to take action against this glorious movement of Oliver Tambo at the time when the movement politically is faced with numerous challenges.

“The SA economy is experiencing an economic crisis manifested in the collapse of investment and economic growth, as well as the further deterioration of the standard of living of the majority of South Africans. This unfortunate situation has not spared us, the workers of the ANC,” the letter read.

TimesLIVE was unable to obtain comment from spokesperson Pule Mabe at the time of publication.

'As a result of this wildcat strike, ANC offices throughout the country will be closed,' party spokesman Pule Mabe said.
Politics
3 months ago

"A contract is no longer enough. Next thing if you complain about the ruling party's inability to deliver, they will want proof you voted for them," ...
Politics
2 months ago

The DA wants the ANC to be investigated for its alleged failure to pay staff contributions to the Unemployment Insurance Fund despite deducting them ...
Politics
3 months ago