The problem is 'the DJ', say disgruntled ANC branches as they march to Luthuli House

Party members from Ekurhuleni aimed shots at regional secretary Thembinkosi Nciza, known as 'the DJ', claiming he manipulated the local government candidates' list to purge those he did not agree with. 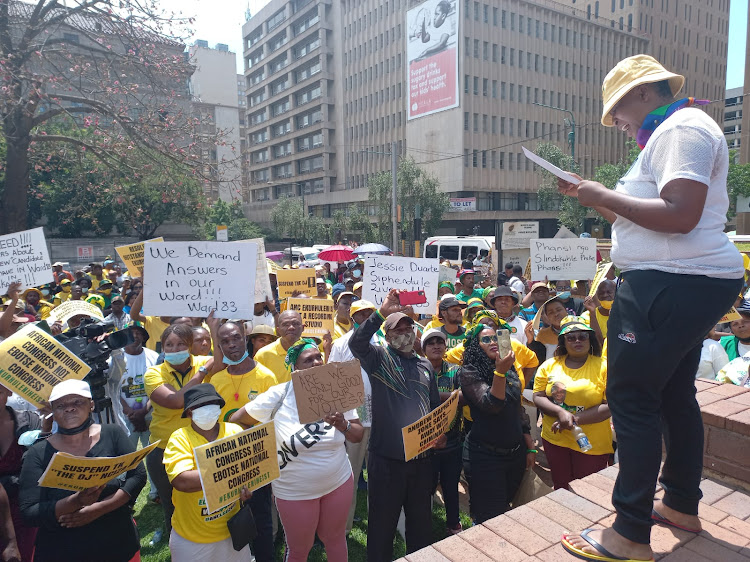 Once upon a time, Luthuli House was a place to discuss serious issues of national importance from the perspective of the governing party.

But nowadays it has transformed into a venue for constant internal protests, with the ANC marching against the ANC.

If it is not the MKMVA toy-toying outside the headquarters, it is the radical economic transformation grouping, or the ANCYL, or the Congress of South African Students (Cosas), or even ANC staffers.

On Monday, it was the turn of party employees to protest about continued unpaid salaries, while a simultaneous protest featured party “members” from its Ekurhuleni region crying foul about the local government candidate list which was allegedly manipulated by regional leaders.

The former, which has become a monthly event because of the ANC’s failure to pay salaries for most of 2021, was overshadowed by the latter, which appeared to have idle young people bussed in singing and dancing while clad in ANC regalia and carrying placards.

The shots were aimed at ANC Ekurhuleni regional secretary Thembinkosi “TK” Nciza, with the protesters claiming he manipulated the list to purge those he does not agree with.

Speaking for the group, Lorraine Mahlosane said they marched to the party headquarters to register their dissatisfaction over Nciza’s leadership.

Nciza was mockingly referred to as the “DJ”, because of a once-powerful record label he formerly co-directed with DJ Sbu.

The protesters want the ANC national executive committee to intervene and get the list redone. They also want to see Nciza’s back, calling for him to “go back to TS Records”.

“We as members of the ANC in Ekurhuleni, on November 15 2021, decided on our own accord to flag our discomfort with the manner in which the LGE 2021 ANC guidelines were manipulated and tampered with by the regional secretary Thembinkosi Nciza,” said Mahlosane, reading from their memorandum of grievances.

The protesters said the ANC committee led by its former deputy president Kgalema Motlanthe had its work cut out to correct Nciza’s mess in Ekurhuleni.

Among the demands, they want:

Mahlosane further charged that Nciza and the REC had failed to comply with ANC guidelines that demand gender and generational balance.

“We are not here as a faction, we are branch members of the ANC who are not satisfied with everything that is happening in that nonsense of a region (Ekurhuleni),” said Mahlosane.

The memorandum was accepted by Mandla Qwane of the party's organising unit. He thanked the protesters for elevating their grievances to the head office.

“You are disciplined members of the ANC who came to Luthuli House to raise your issues. [My role] is to receive your disputes and forward them to the NEC and the officials and make sure they respond with speed,” said Qwane.

Nciza did not answer calls for comment and had not responded to a text message by the time of publishing. This story will be updated should he respond.

Godongwana makes a choice: finance minister to step down from ANC role

He will no longer be chairperson of subcommittee on economic transformation, a powerful position in the party
Politics
2 weeks ago

The ANC's way with words brings a quiet joy

I promised the editor I would not mention FW de Klerk in this column today but the ANC leaves me no choice. Its expression of regret at his ...
Opinion & Analysis
2 weeks ago

Sharing power may be the new normal for us

The hung municipalities and metros after the recent local elections may foreshadow a future of coalition governments. We might to have to get used to ...
Opinion & Analysis
2 weeks ago

When the ANC loses, a transfer of power is going to be a fraught process

Results of the local elections may be a bit muddled, but one thing is pretty clear: the ANC is on its way out, writes Barney Mthombothi.
Opinion & Analysis
2 weeks ago