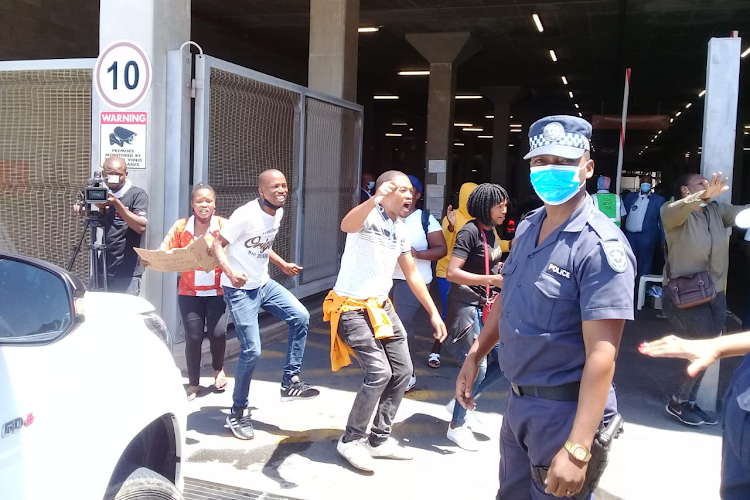 A group of disgruntled voters from Umlazi, south of Durban, protest after an ANC councillor won the ward. The residents said they lodged a dispute with the Electoral Commission.
Image: Mfundo Mkhize

Disgruntled ward 78 residents staged a protest outside the Moses Mabhida Stadium in Durban on Monday, where the inauguration of the eThekwini municipal council was set to to be held.

The group’s spokesperson, Dumisani Ngcobo, told TimesLIVE they were not impressed with the results of the recent election and had complained to the Electoral Commission (IEC).

Ngcobo said they had complained to the IEC and accused the area manager of not handling their complaint.

The group had been punting independent candidate Sphiwe Msomi but the ward was clinched by Zakhele Nomiya of the ANC.

“We have been at our wits' end trying to get the IEC to rectify our disputes,” said Ngcobo, adding that they would not leave the precinct without their dispute being resolved.

The group was monitored by the police.

The ANC managed to form a minority government on Monday, with the party taking the mayor’s chair in Nelson Mandela Bay.
Politics
2 weeks ago

The DA announced its decision to field its mayoral candidate in Johannesburg and remain in the opposition benches if it loses rather than support ...
Politics
2 weeks ago

The ANC national executive committee has approved the names of the mayoral candidates the party will field in the metropolitan municipalities.
Politics
2 weeks ago

ANC in KwaZulu-Natal expected to be told by national structure to let go of the contentious renaming of a key road in Umlazi as co-operation ...
News
2 weeks ago