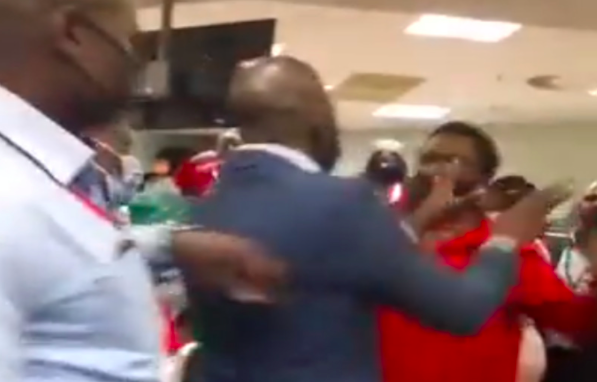 An EFF councillor allegedly punched an ANC councillor in the face during a council meeting in KwaZulu-Natal.
Image: Screenshot

Mayoral election in the uMhlathuze municipality in Richards Bay descended into a fight when an EFF councillor allegedly punched an ANC councillor in the face.

In a now-viral video, shared by isiZulu news channel 1KZN TV, a brawl can be seen taking place after unidentified EFF councillor landed two punches on his unidentified rival.

“Haibo, umshayelani (why are you hitting him)?” people can be heard asking in the background.

The fight is said to have taken place before the election of Dr Nkonzoyakhe Donda as mayor and EFF councillor Nkululeko Ngubane as deputy mayor in the IFP-led coalition municipality. IFP councillor Tobias Gumede was elected as speaker.

According to Sunday World, the fight was about who should lead one of the key economic hubs of the province after the IFP made a U-turn and fielded its own candidates to contest the speaker and mayoral positions instead of supporting the ANC.

The publication said ANC spokesperson in KwaZulu-Natal Nhlakanipho Ntombela accused the IFP of betrayal, while IFP provincial chairperson Thamsanqa Ntuli said it was the ruling party who went back on an agreement that if a party claimed more seats it would take over governance uninterrupted.

Ntuli was quoted as saying: “The ANC wanted to back stab us. They were working behind our backs, conniving with the NFP party in Abaqulusi, Nongoma and eDumbe to take power away from us.”

Neither the ANC nor the EFF have issued statements about the incident.

Malema breaks his silence: 'When a person says to me I will kill you, I can't give him roses'

Despite the incident, the two gentlemen have smoked a peace pipe.
Politics
6 months ago

EFF leader Julius Malema threatened to kill a member of the Pan-African Parliament on Thursday.
Politics
6 months ago

'There's an honourable member who's officially announced that he's going to assassinate his colleague after we leave this chamber,' an MP said after ...
Politics
6 months ago