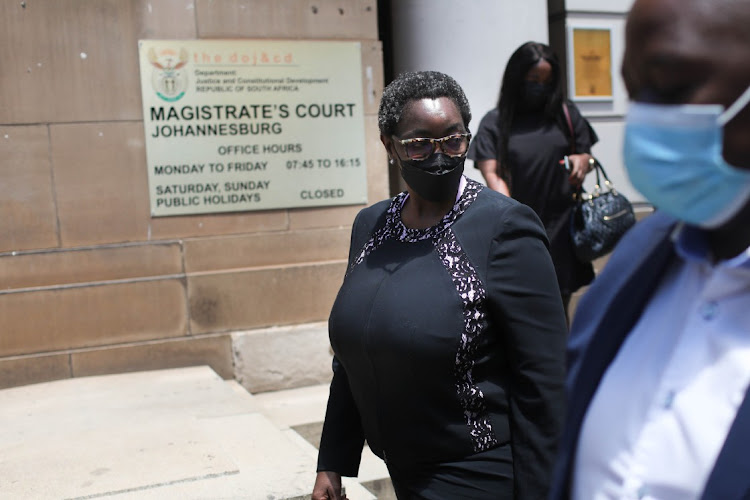 Former minister of social development Bathabile Dlamini at the Johannesburg magistrate's court, where she is facing perjury charges relating to her testimony during the inquiry into her role in the social grant crisis in 2017.
Image: Alaister Russell/TimesLIVE

“The state’s evidence is of such poor quality that it cannot be relied upon. In other words, there is no sufficient evidence upon which the court, acting carefully, may convict the accused.”

This was an argument advanced by advocate Tshepiso Mphahlane on Friday in defence of former social development minister Bathabile Dlamini, who faces a charge of perjury.

Mphahlane told the Johannesburg magistrate's court that his client should be acquitted after cross-examining a witness brought by the National Prosecuting Authority (NPA).

Magistrate Betty Khumalo postponed the case to December 10 to allow the state to respond.

Former SA Social Security Agency CEO and acting director-general Thokozani Magwaza was a critical witness at an inquiry instituted by the Constitutional Court in 2018 into the payments fiasco at Sassa, which found that Dlamini lied under oath.

Magwaza, who is the only state witness, took the stand and told the court that he had a cordial relationship with Dlamini but on some occasions they had differences. This included concerns which he flagged in writing about the minister’s workstreams, which saw Sassa being compromised as staff had to directly report to her.

The perjury trial against former social development minister Bathabile Dlamini will go ahead despite the National Prosecuting Authority asking for it ...
News
7 months ago

He ultimately had to leave the agency after receiving death threats, Magwaza told the court.

“I approached the minister and told her that I can’t die for grants. It was a mutual agreement between us that I leave Sassa because things were no longer tenable for me,” he said.

The defence argued that the evidence before the court was not sufficient for the NPA to prosecute Dlamini.

“We submit with respect that on the available evidence, there is no possibility of conviction besides having the accused testifying, giving incriminating evidence.

“She has nothing to add to what has been said here,” said Mphahlane.

Dlamini on Wednesday pleaded not guilty, telling the court that if she lied or gave false evidence she did so unknowingly.

“The state should not expect that she will be testifying and incriminating herself. It is all there in the transcripts of the inquiry,” argued Mphahlane.

Dlamini’s trial previously hit a snag after the prosecution failed to secure witnesses ahead of the trial.

Former social development minister Bathabile Dlamini is back in the Johannesburg magistrate’s court on Friday.
News
7 months ago

The NPA on Wednesday said it could not proceed as it had not consulted with a witness, Zodwa Mvulane. Khumalo granted the request, only for the state to decide that it would no longer use the witness.

Khumalo on Thursday declined the NPA’s request to yet again postpone the trial to February next year.

The visibly irked Khumalo told the state she had not been convinced that it had made enough effort in getting the trial to proceed.

In declining the state’s request, Khumalo said she considered that Dlamini was brought into court by way of summons, all parties had been in agreement and indicated they would be ready to proceed with the case this month and that if they were not, the court could place other matters on the roll.

Dlamini, the president of the ANC's Women's League, had scores of supporters calling for her acquittal, accusing the state of victimising her because she is a woman and a politician.

Among the supporters in court on Friday were members of the Radical Economic Transformation faction, including former North West premier Supra Mahumapelo and suspended uMkhonto weSizwe spokesperson Carl Niehaus, who both said the charge against Dlamini held no weight and the case was politically-motivated.

Niehaus was also critical of the NPA's conduct.

“The NPA does not have a case, as it is with me, comrade Ace Magashule and others. These cases are trumped up with no basis, except for factional reasons.

“The conduct of the NPA is really questionable. It makes you wonder if they take up cases because there are prospects for prosecution or they were instructed. And what they are doing has serious implications on people's political careers,” he said.

“If I gave false evidence, I did so unknowingly,” said former social development minister Bathabile Dlamini when she appeared in court accused of ...
News
7 months ago

Clad in a black suit, the former social development minister was accompanied by a handful of supporters wearing ANC regalia.
News
7 months ago

The perjury case against former social development minister and ANC Women’s League president Bathabile Dlamini has been set down to proceed for plea ...
News
8 months ago