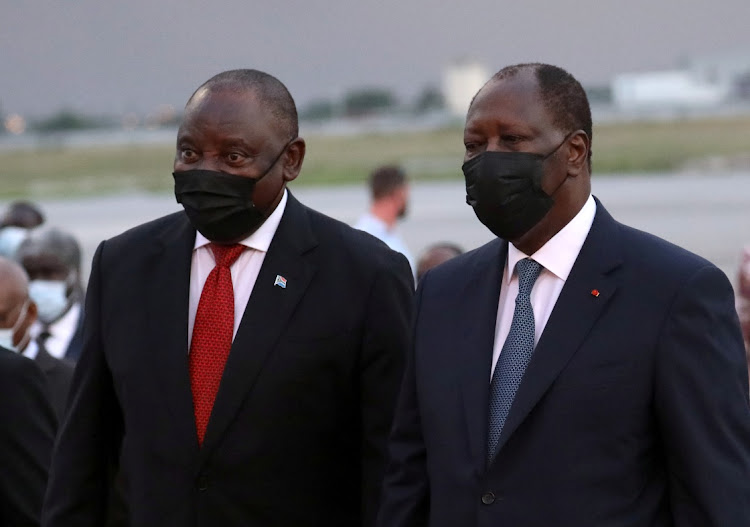 When President Cyril Ramaphosa meets Ivory Coast President Alassane Ouattara at State House in Abidjan on Thursday, he is expected to sign memorandums of understanding and agreements on agriculture, youth development, employment, energy and mines, petroleum and energy.

The meeting of the two heads of state is part of Ramaphosa’s four-nation tour to West Africa which will include Ghana and Senegal.

The stop in Ivory Coast follows successful bilateral talks with Nigerian President Muhammadu Buhari, which was marked by the 10th Session of the Bi-National Commission between the two countries, the presidency said in a statement.

The country presents opportunities beyond its borders as an entry point for investment and a springboard to other countries in West Africa.

The aim of the visit is to strengthen bilateral relations, co-operation on the continental and global level and leverage for mutual benefit the opportunities presented by the African Continental Free Trade Area.

Presidency spokesperson Tyrone Seale said: “The visit comes at a time when the two countries are consolidating a list of strategic areas of co-operation across various economic and social sectors.”

He said during their bilateral meeting on the margins of the African Economies Finance Summit in May, the two presidents made a commitment and a call for a more amplified level of co-operation between their countries.

“As part of continued efforts to strengthen and solidify bilateral relations, the two countries identified 33 draft bilateral memoranda of understanding or agreement covering a wide spectrum of co-operation, and are at various stages of finalisation,” he said.

“Ivory Coast presents opportunities beyond its borders as an entry point for investment and a springboard to other countries in West Africa,” he said.

Earlier: A short welcome ceremony was held at the Félix Houphouët Boigny International Airport
when the South African delegation, led by President Cyril Ramaphosa, arrived in the Republic of Côte d'Ivoire. @TimesLIVE pic.twitter.com/gXK8sa0ZZu

During the two-day visit, Ramaphosa will be presented with honorary citizenship of the Autonomous District of Abidjan and Ouattara is expected to bestow on Ramaphosa the county’s distinguished Order of the Dignity of the Grand Cross.

On Friday, Ramaphosa is expected to embark on a tour of the Autonomous Port of Abidjan before addressing the Ivory Coast-SA Business Forum.

Later, the two presidents and MTN Group CEO Ralph Mupita will symbolically lay the foundation stone for the new headquarters of MTN in Ivory Coast.

President Cyril Ramaphosa concluded his state visit to Nigeria on a high note, saying he believes that both states have “built a solid foundation” to ...
Politics
5 months ago

Travel bans will cause long-term devastation across Africa, Ramaphosa warns

Covid-19 travel bans will cause long-term damage to national economies across Africa, President Cyril Ramaphosa said on his visit to Nigeria on ...
Politics
5 months ago

We must improve the ease of doing business with Nigeria: Ebrahim Patel

If SA and Nigeria want to see their economies grow, both countries need to work towards removing the barriers to doing business, this is the view of ...
Politics
5 months ago