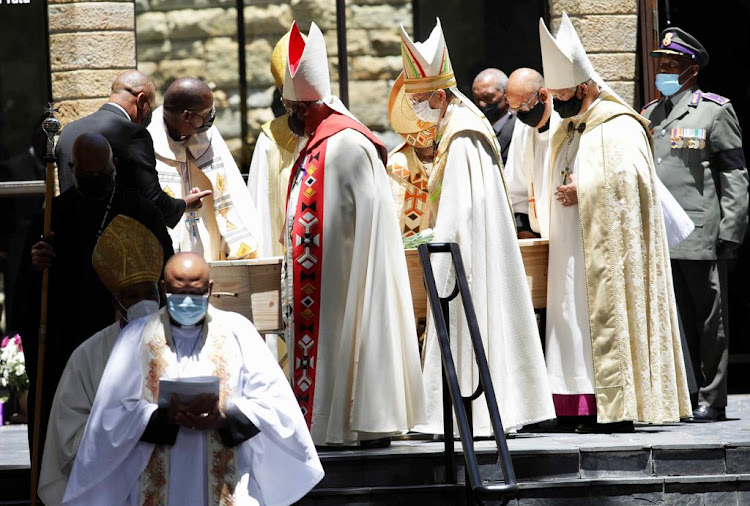 Archbishop emeritus Desmond Tutu's remains being carried out of the St Georges Cathedral after his funeral service.
Image: Esa Alexander

Holomisa was one of the dignitaries, among them President Cyril Ramaphosa and former presidents Thabo Mbeki and Kgalema Motlanthe, who attended Tutu’s funeral at St Georges Cathedral in Cape Town, on Saturday. Holomisa said he was part of the team that planned Tutu’s funeral.

“The ceremony went well but there was something missing. There was no spark in the form of Tutu as we know him,” said Holomisa.

“We know the eloquent speaking — he would jump up and sing. But we enjoyed the ceremony today.”

He said Tutu’s shoes were too big for SA’s present leaders.

“Bishop Tutu, as you know, was an independent person.

“He led from the front, he didn’t mince his words both for the apartheid government and the democratic government. We are happy we had a person like him during the transition.

“But what have we learnt from him? I doubt very much that the current leadership will emulate what he stood for. Maybe the generations to come will learn one thing or two from Archbishop Tutu but not this current crop of leaders,” Holomisa said.

Rain did not dampen the spirits of scores of ordinary South Africans who sat in the open to observe a solemn moment of their lifetime.

People from all walks of life — including the homeless — gathered at the Grand Parade to watch Tutu’s funeral that was beamed live from the cathedral.

Shamsunissa Samuels, 55, from Heideveld, watched the proceedings attentively on the big screen.

“Yesterday I went to pay my last respects to the Arch at the cathedral and today I could not miss the funeral,” said Samuels.

“He was a very gentle and sweet person. I didn’t know him personally but what he did for our land and our people stands out. He loved peace, that’s why he went peacefully.”

“He feared God,” said Niekerk.  “I am also aware of what he did to contribute to the peace we have today in SA.”

“Tata Tutu acknowledged us,” she said. “We attended his programmes. He preached love more than anything. He also taught us about unity. We came here as Rastafarians to give him our last respects because he uplifted us. We are grateful to him. We told ourselves that the rain won’t stop us from attending his funeral.”

‘It will take another generation to produce leaders like Tutu and Madiba’: Mandla Mandela

Chief Mandla Mandela believes it will take another generation for SA to produce leaders of the calibre of Archbishop Emeritus Desmond Tutu and former ...
Politics
2 weeks ago

Michael Gasa, 35, travelled from Johannesburg to attend the funeral.

“The Arch has touched me in so many ways. Desmond Tutu had a profound impact and influence on my life. He has left his footprint and legacy in Soweto. He has lived such a simple life that we should all emulate. He decided to be buried in a cheap coffin. That speaks volumes. I can go on and on. But he is was very selfless and that’s a lesson I took from his life.”

“Desmond Tutu was an honest man. If he didn’t like something, he spoke out. We will never, in the next generation, have an individual like him and that’s why I believe his life is meant to be shared and remembered forever.”

Artist Lebani Sirenje, who is renowned for painting portraits of prominent South Africans at their funerals, enthralled mourners with two paintings ...
News
2 weeks ago

Mourners from across the world will remember the late Archbishop Emeritus Desmond Tutu at an official state funeral held at the St. George's ...
News
2 weeks ago

Keep up with the funeral service of archbishop Emeritus Desmond Tutu.
News
2 weeks ago