Dalai Lama sends his 'condolences, sense of grief and sadness' to Tutu’s family and SA — representative 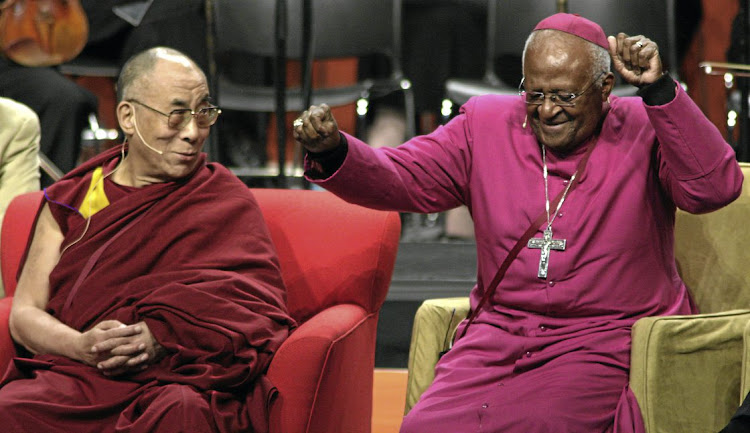 One of the closest and oldest spiritual friends of Archbishop Emeritus Desmond Tutu, the Dalai Lama, will not be attending his funeral due to the pandemic and his old age, his representative said on Saturday.

Tutu, a Nobel Peace Prize recipient enjoyed a close relationship with the Dalai Lama and authored a book together titled “The Book of Joy” in 2016. Their admiration for one another was often openly displayed when the two spiritual leaders met.

When SABC reporter Bongiwe Zwane asked Dorjee whether the Dalai Lama was sad that he could not attend, he said: “I think so because he wanted to join him on his 80th birthday but then he could not come because of the delay in the visa provision but now he could not join because the pandemic...

“He is very sad in his heart and he sends his condolences and his sense of grief, sadness, to his family and the people of SA.”

Mourners from across the world will remember the late Archbishop Emeritus Desmond Tutu at an official state funeral held at the St. George's ...
News
2 weeks ago

Dorjee said Tutu, who supported the Tibetan people, “was one of the moral leaders in our time who was not afraid of speaking out about injustice anywhere, not only when SA was fighting for the liberation and democratic rights but he fought for the rights of Palestine and the Tibetans. He was also not afraid of speaking his mind to his own government when he feels that they were not doing right.”

The remains of the outspoken religious leader and political activist are expected to be interred at his dearly beloved St George’s Cathedral on Saturday.

President Cyril Ramaphosa is expected to deliver the eulogy at the special official category one funeral.

Desmond Tutu: The Munsieville 'boy' who became a world icon

To those who knew him in his youth, Tutu was a soccer-loving guy from a generous, open-hearted family.
News
2 weeks ago

A lover, a fighter, a father, a teacher: Cape Town remembers the many faces of Tutu

The historic city hall building where Nelson Mandela greeted crowds upon his release was bathed in a purple glow as religious leaders read out ...
Multimedia
3 weeks ago

Tutu and the Dalai Lama: A friendship in pursuit of sharing happiness

Tutu and the Dalai Lama, the Buddhist spiritual leader, collaborated on the definitive book about human happiness.
Opinion & Analysis
2 weeks ago