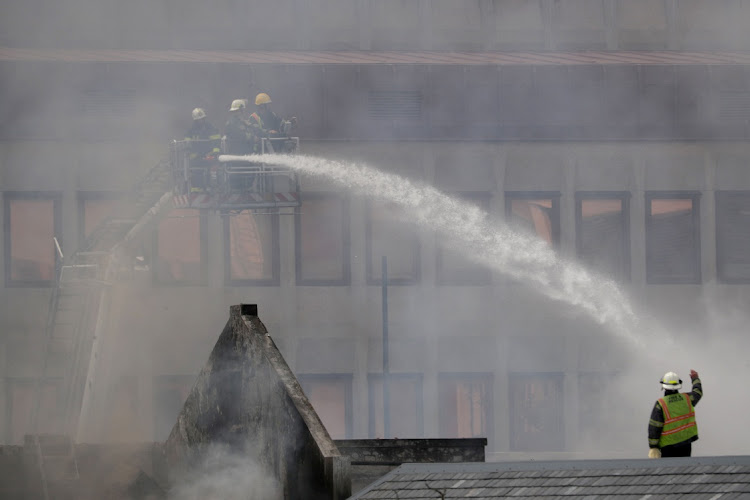 Firemen at work in parliament where a fire broke out in Cape Town on Sunday. REUTERS/Mike Hutchings
Image: MIKE HUTCHINGS

A fire that has damaged sections of parliament in Cape Town and now spread to the National Assembly chamber has sparked concerns over the opening of parliament and state of the nation address scheduled to be held on February 10.

Speaker of parliament Nosiviwe Mapisa-Nqakula confirmed the chamber was on fire, citing concerns this will negatively affect preparations already under way for the official start of parliament.

“It is with shock and sadness that as we were busy with all those preparations and this happened,” she said during a briefing.

Mapisa-Nqakula however said her office was determined to ensure the state of the nation address continued as planned.

“We will still meet and decide if it will continue here or at a different venue. But the state of the nation address will happen, we are just not sure how and where, it might even be a hybrid,” she said.

Public works and infrastructure minister Patricia de Lille, who has been at the parliament precinct since early Sunday morning, said firefighters were on standby to protect Tuynhuys, which serves at the president's office in Cape Town.

Mapisa-Nqakula warned people not to speculate on the cause of the fire.

“It might take police up to 48 hours to give us a preliminary indication of what their suspicions are,” Mapisa-Nqakula said. She could not confirm if any documents were destroyed in the fire.

“The fire brigade was here within six minutes and we must thank them for that,” she said.

The City of Cape Town confirmed that they were on the scene of the fire six minutes after the call was received and that they were already present when fire detection alarms at parliament activated for the first time.

Public works minister Patricia de Lille said it was a "very sad day for democracy in SA" after a fire broke out in parliament in Cape Town on Sunday ...
News
3 weeks ago