Part 1 of the state capture commission report is broken up into three areas, covering SAA, The New Age and the SA Revenue Service 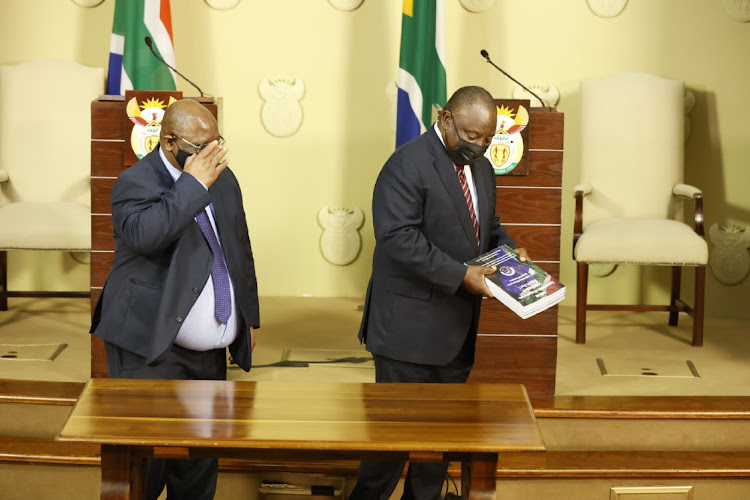 Acting Chief Justice and Chair of the Commission of State Capture Raymond Zondo hands over part 1 of the State Capture Report to President Cyril Ramaphosa at the Union Buildings in Pretoria.
Image: Thulani Mbele

This comes after three years of what Zondo has called “gruelling” oral evidence on various organs of the state that were alleged to have been captured, mostly by the Gupta family and their associates.

“It is a very special day today when the commission is able to deliver to the president part one of its report. It has been a gruelling four years of the commission,” Zondo said.

He added: “In a few days' time, we will complete four years since the announcement of the commission. Three years of that was the oral hearing of that commission. We would’ve liked to hand over a complete report. It has not been possible but we will deliver part 1.”

Part 1 will be presented in three volumes, which include:

In receiving the report, Ramaphosa thanked Zondo and his team for the “extraordinary” work undertaken over the duration of the commission.

Ramaphosa also thanked those who gave evidence at the commission.​

The formal handover of the state capture report to President Cyril Ramaphosa will proceed as planned on Tuesday afternoon.
News
1 week ago

The justice system has a busy schedule for 2022, with murder, mayhem and malfeasance certain to grab the headlines
News
2 weeks ago

Will Ramaphosa survive as ANC president? Party factional battlegrounds to watch out for in 2022

As the ANC prepares to hold an elective conference 12 months from now, all eyes will be on the president's standing within the party
News
2 weeks ago