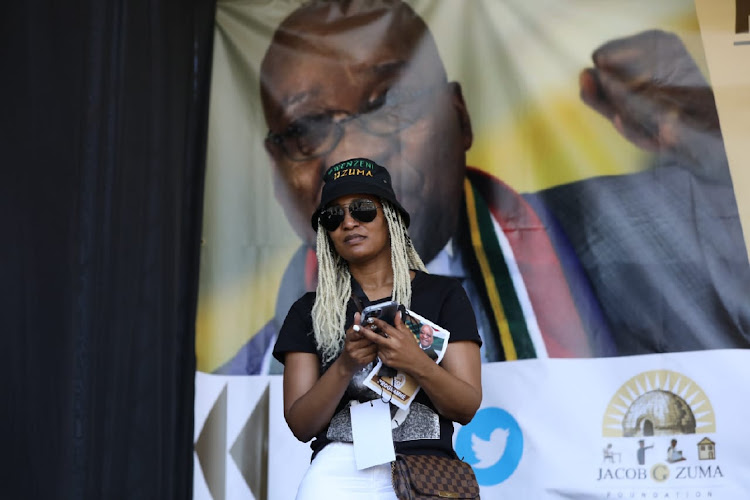 Duduzile Zuma-Sambudla suggested the fire at parliament is a plot to protect President Cyril Ramaphosa from the 'looming' motion of no confidence against him.
Image: Sandile Ndlovu

The daughter of former president Jacob Zuma, Duduzile Zuma-Sambudla, has caused a stir online with her comments on the fire at parliament on Sunday morning.

Taking to social media, Zuma-Sambudla said “there is no such thing as a coincidence” and questioned whether the blaze had anything to do with African Transformation Movement (ATM) resubmitting a motion of no confidence in President Cyril Ramaphosa to National Assembly speaker Nosiviwe Mapisa-Nqakula last month.

The party argued that under Ramaphosa’s watch, irregular expenditure in government and state-owned entities had increased by more than R10bn in a year and many institutions were failing.

It followed a Supreme Court of Appeal ruling setting aside previous speaker Thandi Modise’s decision that a secret ballot on the matter would not be held.

“This is a sign to move parliament to Pretoria. Why must our parliament be in a province where the settlers arrived and started our problems? Those statues must also fall,” she said.

There Is No Such Thing As A Coincidence!Could This Bcause Of The Upcoming Vote Of No Confidence Brought By @ATMovement_SA?This Is A Sign To Move Parliament To PTA.Why Must Our Parliament Be In A Province Where The Settlers Arrived&Started Our Problems?Those Statues Must Also Fall pic.twitter.com/PqmTgMo6l6

Several buildings were damaged by the fire in the parliamentary precinct. Firefighters worked for nearly two days to extinguish the blaze.

On Monday afternoon, parliament said it had deployed 34 firefighters after the fire reignited, further damaging the National Assembly building.

On Tuesday morning, however, it said the fire had again been contained.

“The fight against the fire continued into the night following yesterday afternoon’s reignition propelled by solid south-easterly winds. It necessitated the deployment of heavy-duty aerial firefighting appliances to reinforce the existing capacity.”

MOTION OF NO CONFIDENCE

ATM said it noted the fire with “great suspicion”.

It said the incident must not be used as an opportunity to loot state resources under the guise of refurbishing parliament, or delay the “inevitable” no-confidence motion against the president.

On Monday Mapisa-Nqakula said police were investigating the cause of the fire. She said if their report reveals it was deliberate, that would mean a direct attack on democracy.

On Sunday Ramaphosa said a suspect was being questioned in connection with the fire.

Crime investigation unit The Hawks said the 49-year-old male was due to appear in the Cape Town magistrate’s court on Tuesday.

While some agreed with Zuma-Sambudla, others slammed her for her comments.

Your statement doesn't make a lot of sense to me at all. Do you mean the fire was started so that the Parliament can be moved to Pta or was started to avoid a Vote of no confidence by ATM?

Mara you're part of the problem; you had 9 years to move parliament, you failed. Your calls now are populist in nature and should not be taken seriously. https://t.co/7hvTIPbeeY

And Gauteng isn’t a settler province? I wonder who Pretoria is named after https://t.co/b3oFPtIuDX

Twenty minutes is all it took for fans of former president Jacob Zuma to buy all the available copies of his book "Jacob Zuma Speaks" at a "car boot ...
Politics
1 month ago

Dudu Zuma-Sambudla's message to visiting ANC councillors: ‘Thanks for giving him his flowers while still alive’

Duduzile Zuma-Sambudla has thanked ANC councillors who visited her father, former president Jacob Zuma, at Nkandla and gifted him with a bull worth ...
News
1 month ago

In a video shared on Twitter, Zuma-Sambudla congratulated the red berets for achieving political success since the party was founded in 2013.
Politics
5 months ago