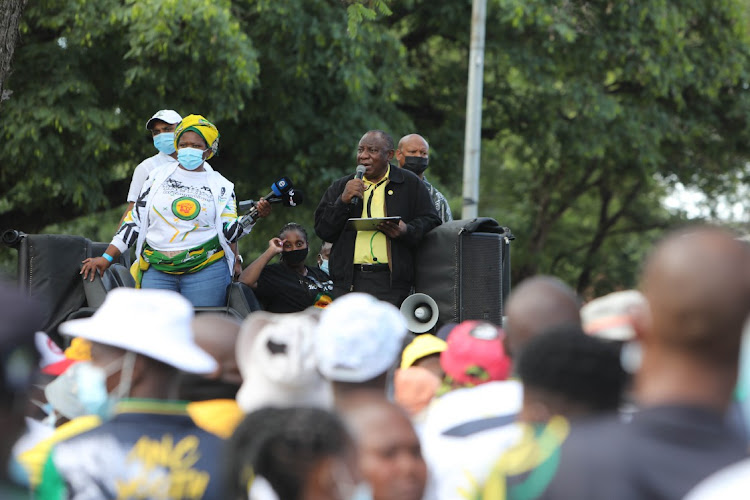 President Cyril Ramaphosa was forced to deliver the Peter Mokaba memorial lecture from the top of a van after ANC Youth League (ANCYL) members allegedly tried to storm into the venue scheduled for the event.

The memorial lecture, organised by the league, was supposed to be held at the Polokwane council chambers in Limpopo. The event was delayed after members protested about limited access to the hall.

When Ramaphosa arrived he attempted to go greet league members stationed outside the perimeter of the venue but was stopped by his protection service members.

He was taken into the venue but quickly came out and climbed on top of the van and began addressing the crowd.

Speaking to TimesLIVE on the sidelines of the event, Sinazo Tshingana, an ANCYL member from Mpumalanga, said they were adamant Ramaphosa must address all of them and not the selected few granted access to the venue.

“You can’t call young people from all over and not address them.”

League members said they were happy Ramaphosa “adhered to their demands” and addressed them.

“We are happy he actually addressed us because it was going to lead to storming of the venue,” one said.

The ANC has “socially distanced itself” from South Africans and can no longer claim to be a leader of society until it changes its ways, says party ...
Politics
1 week ago

There's no cake for Ace: ANC distances itself from Magashule's Limpopo visit

The ANC in Limpopo has distanced itself from a planned visit by suspended secretary-general Ace Magashule to the province on Friday.
Politics
1 week ago

Tickets for the ANC gala dinner have been sold out and these include the seats that sold for a whopping R1.2m to sit next to party president Cyril ...
Politics
1 week ago