'He is tweeting from a sick bed': Julius Malema takes a swipe at Andile Mngxitama over foreign workers 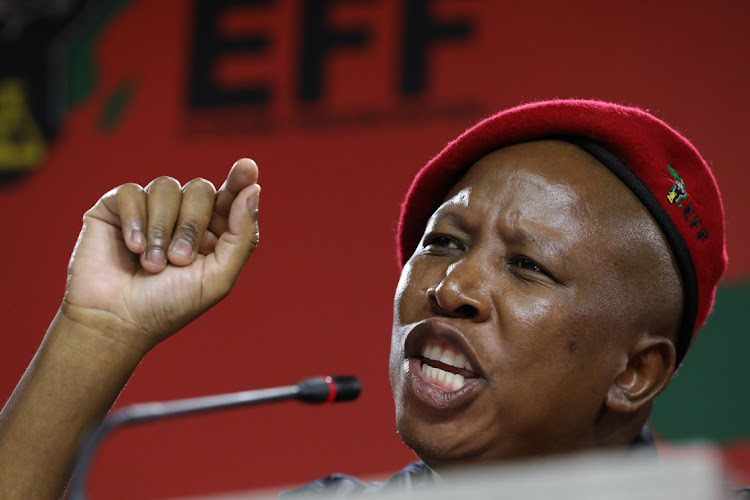 EFF leader Julius Malema on Wednesday took a swipe at BLF leader Andile Mngxitama for calling the red berets flip-floppers over the question of foreigners in SA.

Mngxitama fired a broadside at the EFF after Malema’s announcement on January 8 that the red berets will be visiting businesses in the hospitality industry to demand more locals are hired than foreigners.

Malema’s announcement was viewed by many, including Mngxitama, as a complete U-turn from the party's open-border policy.

Speaking in Kagiso on the West Rand, Malema said EFF detractors were determined to misunderstand the party even when nothing had changed on the open-border policy. The EFF was simply calling for localisation of employment by the hospitality industry, he said.

After Mngxitama mocked the EFF for now being “led by the Patriotic Alliance” which has long called for the deportation of illegal foreigners, Malema said the BLF leader must focus on recovering from his ill-health.

“The PA is leading [EFF] are trying to catch up. What happened to the open border policy? Flip-flop! BLF has long said focus on the employer not the desperate.”

Malema said he had no time to respond to Mngxitama, who was tweeting from his “sick bed”.

According to Malema, the EFF had long said that foreigners working at restaurants and bars did not “hire themselves” and should not be easy targets.

“In 2016 already, we said we need 60% of those employed per company to be South Africans but no-one is going to touch a foreigner because no foreigner has hired himself or herself,” said Malema.

It is from fools like that sick Andile Mngxitama. Instead of concentrating on taking medication and healing himself, he involves himself on matters that are beyond sick people.

“People have made it their business to just misunderstand us. It is from fools like that sick Andile Mngxitama. Instead of concentrating on taking medication and healing himself, he involves himself on matters that are beyond sick people.

“He is tweeting from a sick bed. I cannot waste my time with such characters.”

Malema said the EFF would engage in rolling mass action against establishments that hire foreigners at the expense of South Africans because they were easy to exploit and paid  slave wages.

In this regard, Malema will personally visit a restaurant at the Mall of Africa which he said had a 100% foreign staff.

Malema and EFF leaders will visit other establishments across the country to push for localising employment to favour South Africans.

The EFF stance, he added, was not even about foreigners as it also extended to internal employment within the country.

He said no employer in Polokwane, for example, would be allowed to hire 100% of their staff from Durban and vice versa.

President Cyril Ramaphosa and Southern African Development Community heads of states are on Wednesday participating in an extraordinary summit in ...
News
1 week ago

The government has extended the Zimbabwean exemption permit (ZEP) granted to Zimbabwean nationals to the end of this year.
News
1 week ago

Three home affairs officials in KwaZulu-Natal have been nabbed by the Hawks on charges of corruption and fraud after allegedly being found processing ...
News
1 month ago