Preliminary report on parliament fire expected to be tabled on Friday 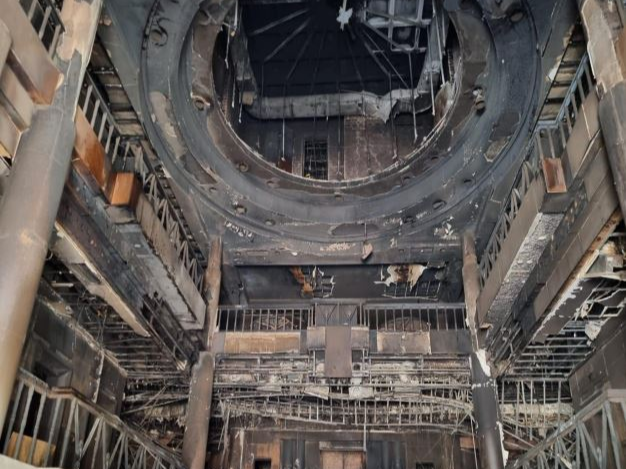 Some of the damage caused by fire to the parliamentary buildings.
Image: Supplied

MPs are on Friday expected to receive a preliminary report on what has transpired since a fire gutted National Assembly buildings earlier this month.

House of committee chairperson Cedric Frolick told MPs on Thursday that a joint standing committee on the financial management of parliament will convene where the acting secretary to parliament will table a preliminary report on the fire.

“At this stage, what is being prioritised is the alternative office space for the affected parties including the ANC, PAC, Good and NFP, whose offices have been destroyed. We do not know at this stage the extent of the destruction that has taken place there because the building has been declared unsafe,” said Frolick.

Frolick updated MPs during a joint programming committee meeting of the National Assembly and National Council of Provinces (NCOP) on Thursday morning, where the two houses jointly planned, considered and agreed on business for the year ahead.

While investigations were ongoing, Frolick said, there were “certain difficulties because the National Assembly chamber, with the offices around and above it, have been completely gutted and have been rendered by the public works engineers to be unsafe”.

Zandile Christmas Mafe, who is facing a terrorism charge after the fire that destroyed large parts of parliament, began 30 days of observation at a ...
News
6 days ago

This, he said, had affected the work that the police have to do. “There is a closing report ... in the public domain that emanates from the Cape Town fire department on what their assessment is. That report in no way replaces the forensic work that needs to be done inside the building to try to come to a point where we can say where and how the fire started. That is the work of the police and they are continuing with that.”

He said the report was given to the speaker and subsequently handed to the police.

“We immediately identified different work streams that we have to focus on when we deal with this matter, which include the investigations, the contingency plans being made in terms of Sona and related processes, the tabling of the budget, security and communication.”

Discussions continue regarding plans for  the state of the nation address taking place on February 10 at the Cape Town city hall.

“Since the fire started, there was immediate discussion and consultation between the chairperson of the NCOP, speaker, leaders and representatives of various political parties. This was followed up on Monday afternoon where the speaker had a meeting of all political parties in the National Assembly and 10 parties were briefed on the developments taking place.”

All outstanding matters will be addressed on Friday, he said.

Parliament promises ‘no fanciful things’ at a Sona sans bling

This is what the address, for which R1.9m has been budgeted, will look like. However, the cost could ‘come down’
Politics
6 days ago

Questions, including the role and involvement of the department of public works and infrastructure as well as issues around security, will also be addressed.

“But we must be mindful that these are preliminary reports and will be updated, and the different political parties will be taken on board as and when information becomes available.”

NCOP chair Amos Masondo told MPs it was important to note the context in which the fire took place. “The fact that this also happened when the country is faced with the Covid-19 pandemic is important and there is also that [it occurred] just a few months from the July 2021 unrest, and we also note that this happened when the state capture report had been reported to the president.

“We also note that there has been some tension between parliament administration and Nehawu,” he said.

Chairing a programming committee meeting earlier, National Assembly speaker Nosiviwe Mapisa-Nqakula told members that the damage to the chamber and other spaces left them deeply saddened.

Mapisa-Nqakula has, since the blaze, held meetings with chief whips and leaders of political parties to discuss various options on how parliament will do its work.

“These discussions have included issues around appropriate spaces for the convening of not only the forthcoming joint sitting for the state of the nation address but also future sittings of the National Assembly.”

Former public protector Thuli Madonsela has apologised to Legal Aid SA for a tweet about the man arrested in connection with the fire that ravaged ...
News
1 week ago

Also discussed was the multiparty security task team, which was intended to be established when parliament reconvened this year.

“The matter will now be fast-tracked,” said Mapisa-Nqakula.

The ACDP’s Steven Swart said, “in hindsight, had we taken up all our responsibilities in this matter then maybe the devastating fire could have been avoided”.

The IFP’s Narend Singh suggested that MPs agree on the composition of the task team so that work can start. “I would like to suggest that every political party have a representative because it is such an important committee that is dealing with all of us. Perhaps the administration can come up with a composition of the committee so that we can start our work in earnest.”

MPs agreed that the committee will initially start with representatives from all political parties to set out the terms of the work that needs to be done. It will later be reduced to about six members.

Homeless people come out in support of ‘scapegoat’ in parliament fire

A clean-shaven Zandile Mafe, who is accused of setting alight the National Assembly chambers on January 2, appeared in the Cape Town magistrate’s ...
News
1 week ago

No insurance for fire-ravaged parliament, could cost R1bn to rebuild

The houses of parliament have no insurance cover, meaning a repair and reconstruction bill that could reach R1bn will have to be footed by taxpayers.
News
1 week ago

Ramaphosa and his administration are guilty of negligence, dereliction of duty and disregard for national security
Opinion & Analysis
1 week ago